VILE: Anti-Police Graffiti Calling for Violence Against Cops Is Spreading Across Texas

I don’t have words for how angry this makes me.[1] Violent anti-police graffiti is now spreading across Texas. It has appeared in Austin and Houston now. Statements such as, “Run Over Cops At Traffic Stops; Shoot Them In The Cop Car!” are appearing on 7-11 stores and other places. Emojis depicting shooting cops in the head were found in Houston immediately after Deputy Goforth was gunned down while filling his patrol car at a gas station. An unstable black man walked up behind him and fired multiple times into his head and back. Goforth died instantly, but the murderous thug emptied his 15-round clip into the officer anyway as he lay on the ground in his own pooling blood. Two little children were orphaned that day and a grieving widow was left to face a hateful world where her husband was taken far too soon. This has to be stopped – the cops are now patrolling in pairs and are on high alert. It’s a powder keg ready to blow. 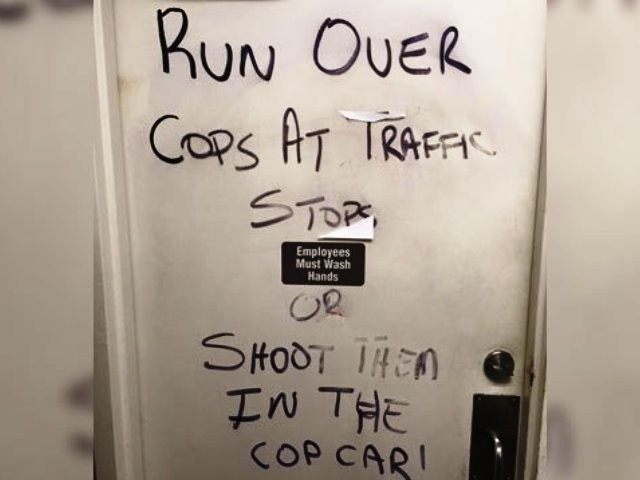 Hate speech and graffiti calling for violence against cops has spread across Texas. Grafitti has recently appeared in both Austin, and in Houston, Texas. Violence-inflaming statements in Austin proclaim – “Run Over Cops At Traffic Stops; Shoot Them In The Cop Car!“

As reported[4] by Breitbart Texas, this type of graffiti is also now defacing public property in Houston, Texas.

Following the execution last week of a sheriff’s deputy in Harris County, Texas, graffiti images calling for violence against police have appeared on property around Houston. The emojis show a police officer with a gun pointed to his head. These taggings follow the murder of Harris County Deputy Darren Goforth who was shot in the head execution-style as he was putting gas in his patrol car. The suspect who shot the uniformed deputy unloaded 15 rounds[5] into his head and body.

CLEAT[7] is an acronym for Combined Law Enforcement Associations of Texas. It is the largest police organization in the state and has over 100 local affiliates.

The CLEAT president said, “They sit at home, they do it over the internet and just get away with it. Now, the problem becomes when someone who is emotionally unstable reads that, or get’s exposed to that, that could quite possibly push them over the edge.”

The suspect who has been arrested for the execution of Deputy Goforth, has suffered from mental illness in the past, and was declared mentally incompetent in 2012 to stand trial for assault, as reported[8] by Breitbart Texas.

Harrison told Fox 7, “There needs to be someone in elected office that finally stands up and says, ‘you know what, if you are going to do these kinds of things, then if something happens and someone does get killed or injured there’s a punishment available and you’re going to get that.’”

He said this inciting violence against peace officers is not constitutionally protected free speech.

Harrison stated, “Our free speech is limited all the time. If you get on an airplane you mention the word ‘bomb’ or ‘high jacking,’ your free speech has been altered because you can’t do that. You can’t go into a movie theater and yell ‘fire.’”

As reported[9] by Breitbart Texas, the president of CLEAT, and the executive director and president of the Texas Municipal Police Association (TMPA[10]), sent strongly worded letters to President Obama and U.S. Attorney General Loretta Lynch asking them to speak out against the rising violence against and murder of police officers. These two organizations are the two largest police unions in the Lone Star state.

The CLEAT president also criticized Texas Lieutenant Governor Dan Patrick for telling Texans to pick up the tab for police officers’ lunches. In a letter on his website[11], Patrick urged Texans, and all Americans, to show more respect for cops. He also said, “If you are financially able, when you see them in a restaurant on duty pick up their lunch check, send over a dessert, or simply stop by their table briefly and say thank you for their service.”

Harrison said “it’s going to take more than a piece of pie and a thank you from the politicians to fix what’s wrong in this country.”

CLEAT is right, it’s going to take a lot more than a piece of pie to fix this. But I still think people should show their appreciation to officers when they run into them. Having said that, shame on Barack Obama and Loretta Lynch for not coming out and addressing this publicly. By staying silent they are encouraging more violence. Politicians should also be speaking out on this, along with church leaders. There should be a resounding cry across America that this will not be tolerated. I would add that if you live where you can, arm up and stay armed. There is no telling where next something will go down these days. The best deterrent to crime is being armed and ready. 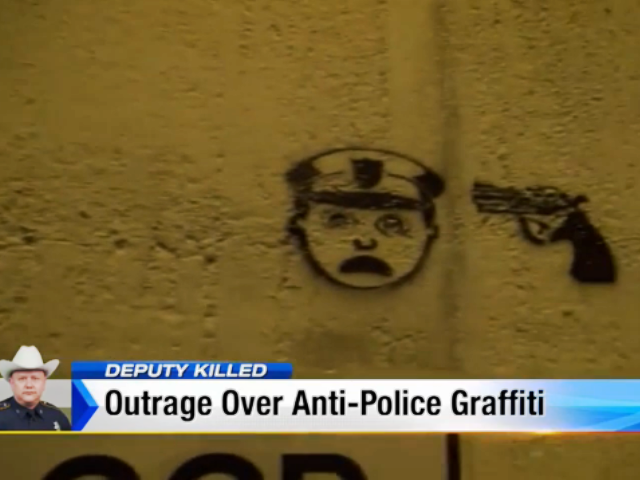