The radicals at Mizzou[1] and the Black Lives Matter thugs got all twisted out of shape because of the terrorist attacks in Paris. Not because blood-thirsty Jihadists slaughtered innocent people. Oh no… that would be sane. Nope, they are upset because people are paying more attention to Paris than to them. I kid you not. They just started the sickest, vilest hashtag campaign I have seen to date. #F**kParis. They actually have the stones to say that everything they have faked and ginned up at Mizzou is on a par with the mass murders in France. Now that’s delusional. That’s a whole new level of selfishness for the record books. These radicals are raving sociopaths. Their little hashtag campaign proves it. 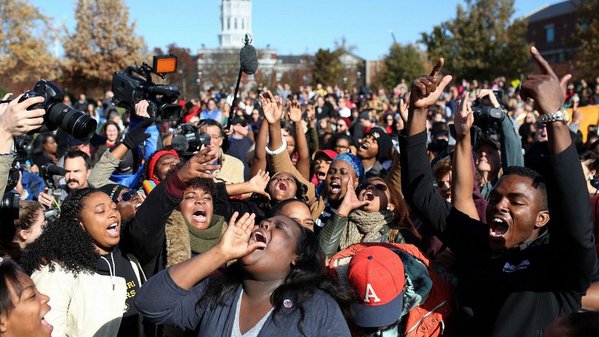 Yesterday, the thoughtful, clear-thinking individuals behind the Mizzou protests and #BlackLivesMatter issued tweets of indignation that the bloody calamity in Paris was detracting from their REAL struggle against terror on the leafy campus colleges across the fruited plain. 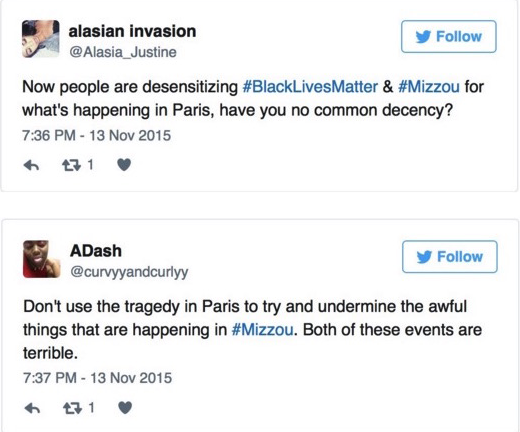 Well that wasn’t enough apparently. Now they’ve created what has to be one of the sickest hashtag campaigns ever to express their disgust over the unfair attention 129 dead bodies are getting over their fake poop swastikas[4] and flag-burning: #f**kparis.

Here’s a selection of the hate-filled messages. 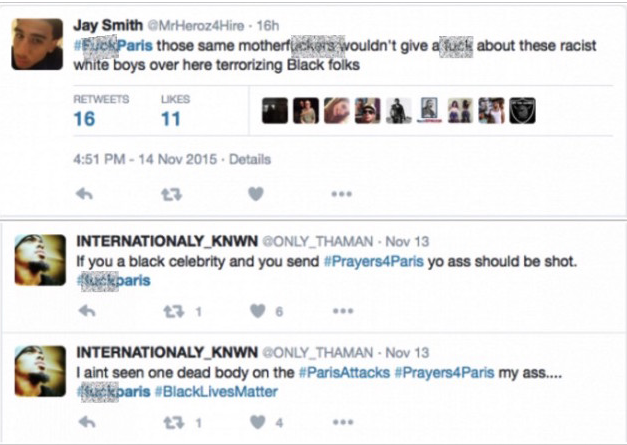 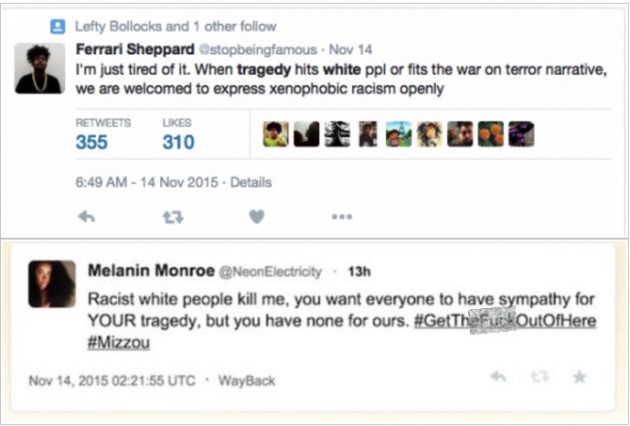 Interesting how these despicable, self-absorbed cretins seeking social justice for all the transgressions they have apparently endured are beginning to sound just like the spoiled white brats they decry.

Just despicable behavior. It’s all about them and their Marxist entitlements. Social justice has run amok on these campuses and now you have students who are actually racists that have no morals, no ethics, no empathy for anyone who is not black. How sick is that? 132 people lost their lives in Paris and over 350 others were injured, yet they whine about white privilege and how ‘unsafe’ they feel. Give me a break. They have gotten people fired and have taken universities hostage… they have white students fearful to even go to school… and yet they demand more. They can stuff it. We should buy all of them tickets to the Middle East and drop them right in the middle of Syria so they can have something real to whine about. Their struggle is nothing but contrived chaos driven by racists and communists. These people have more in common with the terrorists than the victims in Paris. Much more.