Good for her[1]. He deserved worse. She goes to handle his bill and he goes to handle her… first touching her neck and getting slapped down… then grabbing her bottom and getting smacked. He gets back up and confronts her and she whacks him unconscious with a menu. That must have been some hit. What bugs me is four men and one woman ran to the aid of the groper and appeared to yell at the woman who was assaulted. That’s messed up. That figures – it’s Russia. 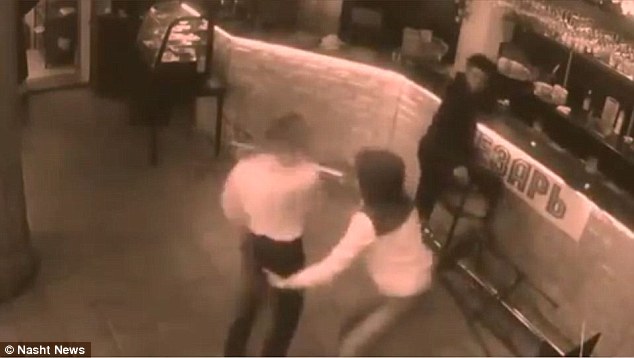 Attack: The woman had been giving him the bill when the customer attacked her – groping her bottom.

A Russian man was given just what he deserved when he decided to grope his waitress – ending up flat on the floor after she smacked him repeatedly with the only weapon she had to hand: a menu.

CCTV footage of the incident shows how everything began calmly before something sparks a argument between the two.

The 53 second video captures the waitress handing the man the bill before he reaches across and appeared to touch her somewhere on her neck.

She reacted quickly, pushing him away – but this apparently enrages the customer, who leaps off his seat.

As she tries to get away, the man gropes her bottom.

But this time the waitress used all her might to hit him with the menu – knocking her attacker to the ground.

But he is yet to learn his lesson, and gets up one more time, squaring up to her in an extremely threatening manner.

The waitress is having none of it, and smacks him back down before leaving the room.

A group of men come to the aid of the attacker, who remains lying on the floor.

The shocking attack, which is understood to have taken place in Kazan, more than 500 miles east of Moscow, has already clocked up more than three million views on YouTube.

‘I think it’s safe to say, he got served,’ said YouTube commenter TheStRyder91.

In a sane world, the men would have righteously beat the crap out of this deviant and the woman would have comforted the other waitress, but no… that’s not the culture in Russia. I guess they think that the woman should have just taken it. In many parts of the world, waitresses are considered prostitutes. I learned this when I was young and waitressing when foreigners would come in. I feel no pity for the scuz she knocked about. She probably got fired over the altercation and I hope that someone hired her right away after seeing what occurred via video. He got served alright.