I am so thankful to see[1] that the patriots of The Center for Medical Progress are not stopping their exposure of the butchers of Planned Parenthood even though they have been indicted. They are being prosecuted for exposing these monsters for selling baby parts. A biased legal system is charging them instead of said demons and threatening them with prison time and massive fines because they won’t cease and desist – shut up and go away. Nice legal gymnastics there. Too bad it won’t stop them. In fact, these filmmakers are doubling down on exposing these infanticide enthusiasts even more and it is epic. 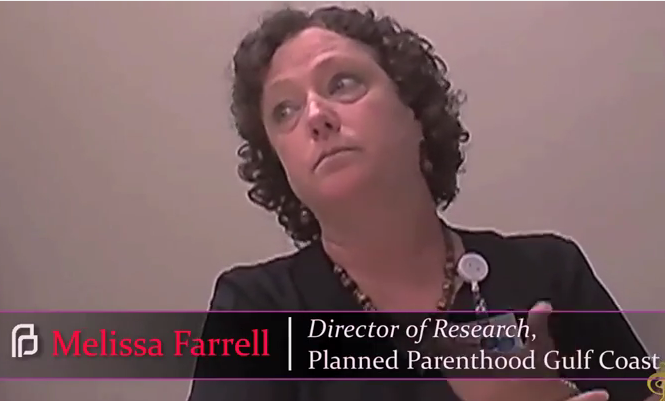 In the new video released by the pro-life group, Melissa Farrell, Planned Parenthood Gulf Coast’s director of research, said that “we get requests a lot for fetal tissue.”

“We had two levels of invoicing for them,” Farrell said. “We had it worded as ‘per consent,’ because the consent process was the administrative part that we had to do. Then we had an overall ‘administrative fee’ for basically working it into um, the clinics themselves. And at the time, ‘per consent’ was 25 dollars.”

In a separate clip, when asked by the filmmakers about “renumeration,” Planned Parenthood Gulf Coast CEO Melaney Linton said that Farrell will “work on all of that with you.”

It takes a lot of guts to keep at it when you are under threat of indictment. I’m impressed. What this should tell every corrupt, murdering leftist out there is that their time is coming and someone is coming to expose them. The moves against these patriots is unconstitutional in the extreme and nothing less than a witch hunt to silence those who stand against abortionists and the retailers of infant body parts. The Center for Medical Progress is fighting a governmental Goliath here and they are all in. That’s the courage of your convictions on display and it takes a special kind of dedication and faith to keep on in the face of such threats. Good for these kids and I’m proud of them. What are you willing to go down for? Each of us has that one issue worth going to prison for… this is theirs.