Our schools have turned into free-for-all zones[1], where violence is the norm. They are very, very dangerous places for teachers and students alike. This is why I have been a staunch proponent of home schooling since the middle ’90s. These attacks on teachers are becoming commonplace. The student should never be allowed back in that school period and he should be charged as an adult for assault. Shame on those students for not stepping up to pull this thug off that teacher. Shame on the teacher for not fighting back. If you are going to teach school, you better have the cajones to stand up to teenage thugs. It should be part of your job description. 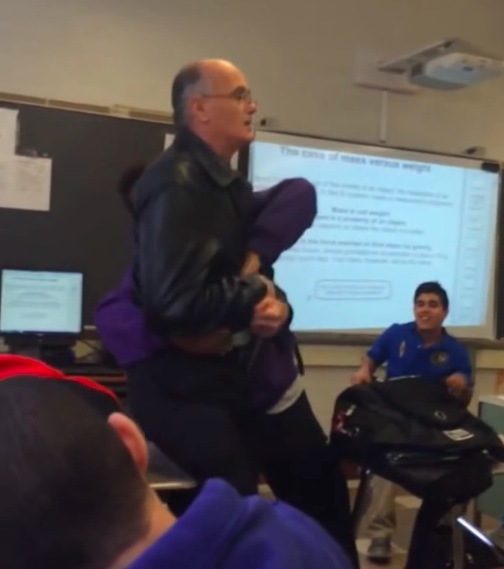 After a New Jersey high school teacher confiscated a 16-year-old student’s cellphone during class Thursday, the student attacked the 62-year-old teacher and slammed him to the floor, police and school officials said.

The student, a 9th grader, was arrested on Friday and charged with third-degree aggravated assault[2], police said. A video of the attack at John F. Kennedy High School in Paterson was posted to YouTube. The student has been suspended.

David Cozart, the school’s principal of operations, said the physics teacher apparently took the student’s cellphone from a classmate.

In the clip, the student wrapped his arms around the teacher, who seemingly tried to continue instruction before the student slammed him into a desk.

Other students are heard reacting verbally to the altercation, but no one physically intervened — in fact, several move away. After the student wrestled the teacher to a corner and slammed him to the floor, a couple of students yelled for security to be called.

The names of the student and teacher haven’t been released.

“What strikes me is that the teacher never even defended himself,” Lee McNulty, a retired JFK teacher, told NorthJersey.com[3]. “That just shows how much teachers are afraid of losing their job.”

Peter Tirri, president of the Paterson Education Association, the teachers union, told the news outlet he’s “disappointed” that other students didn’t come to the teacher’s aid. “Maybe they were afraid,” he added. “I don’t know.”

“It’s troubling that in our society today students think that inside a school they can put their hands on each other and teachers as well,” Jonathan Hodges, a veteran school board member, told NorthJersey.com. “I went online trying to find this video and I found numerous videos of teachers being attacked by their students.”

Violence over a cell phone. Pathetic. I would ask the teacher, is your job so important to you that you are willing to get the crap beat out of you or get killed? My grandchildren are tucked away in a private school and I am thankful for that every day. If I had children in school still, there is no way I would let them go to public school, no matter what the cost was. I would home school them all over again. Schools are war zones now. The government has removed God and discipline from our centers of learning. Instead they have become breeding grounds for gangs and socialized monsters. Kids are lucky to make it out of these cesspools in one piece. You will see an ever increasing number of attacks by students on their teachers – they don’t fear them and these kids are predators.