When Doctors Want to Pull Life Support on Son, Dad Gets Into Armed Standoff. What It Leads to is Miraculous. [Video]

A 27 year-old had a series of strokes/seizures[1] and the hospital put him on life support. When his father got there, they told him they would be taking him off life support and harvesting his organs. The father had brought a gun… he intended to commit suicide if his son died and demanded time with his son. Another son wrested that gun from him, but there was a four hour standoff where the father spoke to his son and told him to wake up. The son squeezed his hand three or four times and later woke that night. The father never meant to hurt anyone but himself and spent 77 days in prison for defending his son and saving his life. He doesn’t regret a minute of it. 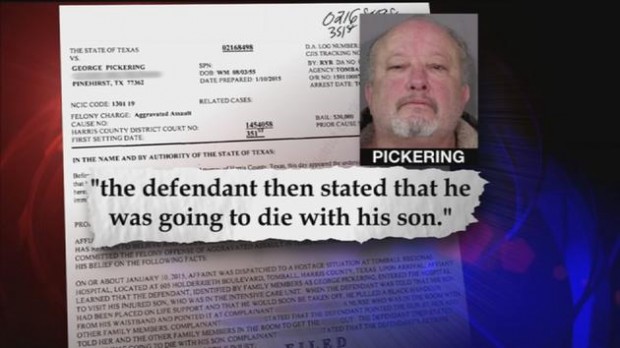 After receiving the news from doctors that his son, who had recently suffered a series of strokes, was essentially brain dead and could soon be taken off life support, a desperate father said he entered a hospital in Tomball, Texas, prepared to kill himself if his son were to die.

With a 9mm handgun in his waistband, George Pickering, 59, said he went into his son’s room at Tomball Regional Medical Center’s intensive care unit on Jan. 10 and was informed that the life support keeping him alive could soon be removed. The tragic news set Pickering off. He pulled out his handgun and ordered everyone to get out of the room because, the dad explained to TheBlaze, it was his time to be with his son.

Pickering’s actions set in motion what would be a four-hour standoff with police at the hospital — but during that time, he said, a “miracle” occurred.

Shortly after the standoff began, Pickering said another son actually wrestled the gun away from him. At that point, it basically became a “verbal standoff” with authorities, he said.

As police and a SWAT team surrounded the hospital, Pickering said he prayed and talked to his adult son, who was still on life support. He was left astonished by what he witnessed.

“Squeeze my hand if you can hear me, Georgie,” Pickering whispered to his son.

The father said he felt a squeeze. He repeated the command.

After four tense hours, Pickering surrendered to police peacefully, believing he had done enough to prove that his son should be kept alive. Prior to the incident, he reported being disturbed by hospital staff’s hasty discussions about harvesting his 27-year-old son’s organs. He said he did not have the medical power of attorney over his son.

Later that night, his son woke up.

Pickering said he rolled over in his bed, looked at his stepmother and said, “I love you momma.”

“I have no regrets,” he told TheBlaze. “I can’t have any regrets. Nobody got hurt — well, except for me I guess. I was never planning to hurt anybody.”

Pickering was arrested on two charges of aggravated assault and spent 77 days in jail. He is scheduled to appear in court on Friday for a hearing connected to the incident. However, the father could face additional charges for violating a no-contact order issued after the armed standoff — and the story behind that “crime” is just as gripping.

During his 77 days in jail, Pickering got a visit every Tuesday from an ex-convict who would talk and pray with him as he worked through the trying time in his life. The man was from Silver Springs Baptist Church in Magnolia, Texas.

Shortly after getting out of jail, Pickering found himself in the parking lot of Silver Springs Baptist Church. The pastor, Scott Zbylot, recalled the troubled man pleading, “I need God, I need Jesus — can you help me.” He said the church welcomed him with open arms.

In April, Zbylot told TheBlaze, Pickering decided to give his life to Christ and was invited to be baptized on Easter Sunday. Having nearly lost him, Pickering said he invited his son to watch him get baptized.

After Pickering’s moving baptism, Zbylot said his son, the one who nearly died, went into a side room with one of the church’s outreach ministers “confessing his sins” and “putting it all out there.” In the middle of his sermon, he said, the son emerged. He too was ready to be baptized.

Zbylot said he turned to Pickering and said, “I think you need to baptize your son.” And so, months after nearly losing him forever, Pickering baptized his son — a direct violation of the “no-contact” order put in place after the January standoff at the hospital.

While in prison, the father gave his soul to God. He was baptized when he got out and his son was there as well – the father baptized his son. In doing so, he violated the “No Contact” order a judge had placed on him and his bail has been revoked. He is in prison once again until his next hearing. The church will take care of his son while he is in there as the son cannot work due to the seizures and his father is all he has. Once again, the father has no regrets and would do it all again. That is a father’s undying love and two more souls were saved in the process. It’s great to start a week with miracles happening. The judge should release the father to go home – it would be the right and ethical thing to do here.