When will this be coming to America? Mexican mayor marries ALLIGATOR princess [Video]

Okay, I know this is some kind of superstitious, wacky tradition[1], but come on! Every year the mayor marries a new young alligator bride who is some kind of reincarnated princess. She’s baptized (ridiculous) and dressed in white (it shows off her scaly skin and elliptical eyes). So many questions… first off, how do you know exactly that she’s a virgin? I mean, you dressed her in white, isn’t that symbolic? And being a supposed Christian, hence the baptizing, isn’t this considered polygamy? Which I hear is coming to the US – no wait, it’s already here. These people consider this symbolic I’m sure, but a Catholic priest baptizing an alligator? Really? PETA would have a field day with the duct tape around the snout as well. This is so very silly and probably another excuse to party. 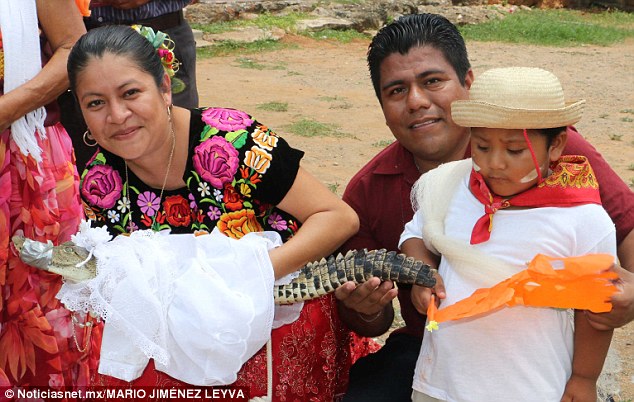 Joel Vazquez Rojas , the mayor of San Pedro Huamelula in Mexico, married an alligator believed to be a princess (above with his human wife, alligator bride, and human child).

One town in Mexico just got a very snappy first lady.

On Tuesday, Joel Vazquez Rojas, the mayor of San Pedro Huamelula, tied the knot with an alligator princess named María Isabel in a traditional ceremony as hundreds in the town watched and cheered.

The annual ceremony is meant to bring plenty of fish, shrimp and seafood to the many fisherman who live in the Pacific coast town.

It was busy day for the lucky alligator, as not only did she walk down the aisle dressed in traditional white garb and with a very large piece of duct tape around her snout, but she was also baptized prior to the festivities.

The ceremony happens every year, and Mayor Rojas even exchanges vows with the reptile, who is now referred to as his wife.

And like all wedding parties, this one was followed by a massive ceremony where the newlywed princess alligator changed into more colorful attire and was held by her new husband as he danced and swung her around the floor.

There is no mention of what happened to Mayor Rojas’ alligator bride from last year, or how 3-year-old Maria Isabel beat out the other eligible ladies for this highly anticipated arranged marriage.

Also being kept under wraps is where Maria Isabel will be living now that she is married to the town mayor.

Previous alligator wives and Rojas’ human wife seemed to have no objection to welcoming this new woman into their lives.

The ceremony and reception, which also featured fireworks to mark the momentous occasion, was all paid for by the town council.

I highly doubt that this has anything realistically to do with fish, shrimp and seafood throwing themselves at fishermen there, but anything goes, I guess. Wonder what happens to the alligator once she’s been married off? Don’t even get me started on the symbology of taping the bride’s snout closed. One commenter called it: ‘My Big Fat Alligator Wedding.’ Heh. And the bride wore duct tape[3], while the mayor danced with his new squeeze. I’m sure this is considered fun as well, but it strikes me as hedonistic and tribal, rather than a Christian ceremony. And they pay money for this.