This is rich.[1] A Fox reporter, Amit Horowitz, went to New York and interviewed a bunch of white hipsters. He asked them about the police. The hipsters called the cops out of control and greedy. They labeled them as racist and went on about police brutality. These ding dongs spoke about how minorities had a justifiable rage against police and basically just how evil they were. Then the reporter went to Harlem and spoke to black people there. Almost all of them signed a petition saying how great the NYPD was. They had great things to say about the police as well. What a difference between how the white idiots think things are versus how they really are. Just put the latte down, back away and actually get some facts for a change. 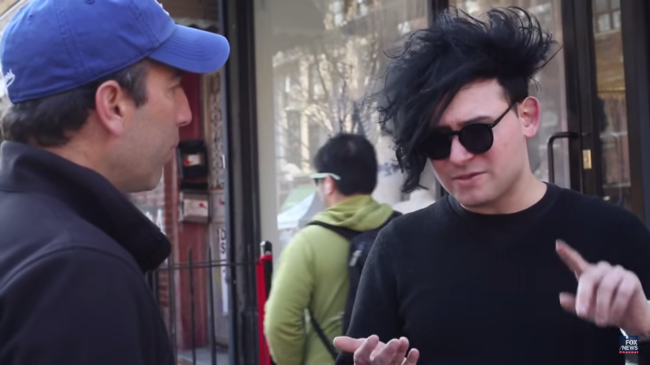 White liberals like to consider themselves as champions of minorities and allies in the fight against racism. Despite their best intentions, white liberals see racism in areas it doesn’t exist.

Amit Horowitz asked white hipsters in Brooklyn and minorities in Harlem what they thought about the police — and the difference was startling.

The hipsters described the cops as being “out of control,” “greedy,” and “racist;” spoke of “an epidemic of police brutality;” and said minorities have a “justifiable rage against police.”

“They’re greedy, and they’re racists and it’s not just in New York, it’s nationwide,” said one of the white liberals.

One person in Harlem asked for even more presence by the police. Many of them related how the police had been there when they needed them the most. They also spoke about how fair the officers were. The difference between what was said about the officers was night and day. It was revealing. Cops’ lives matter too, in fact, all lives matter. Seems to me the folks in Harlem have more sense than many of the people in Brooklyn. The white hipsters need a reality adjustment and to get their coiffed heads out of their you-know-wheres. I love the police and think they are highly under appreciated… especially by white, privileged morons.