Country singer Willie Nelson has a long, well deserved reputation as a major pothead. But now he’s decided to open his own marijuana business and no one anywhere is surprised at this move! 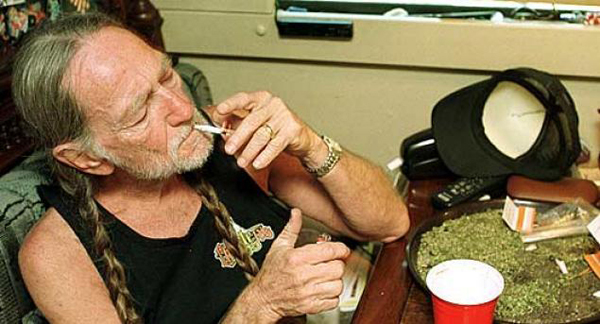 Who doesn’t know of Nelson’s many arrests for pot possession? Well, Nelson is apparently ready to put his extensive knowledge of pot and his famous name into a new venture: Willie Nelson Pot Dealer[1].

Willie Nelson Is Launching His Own Brand of Weed

There will be branded bongs and stores, too, as Willie gets out ahead of big industry in states where pot is legal.

Willie Nelson takes a hit of the cigarette-sized vaporizer in his gnarled hand, exhaling a small cloud, before placing it on the foldout table in front of us. We’re seated in the cool enclave of his tour bus, at the entrance to his sprawling property just outside Austin, Texas, which he has dubbed the town of Luck. Up a hill and around a corner, people are rocking out at Willie’s own Heartbreaker Banquet, an annual fundraiser/music festival held concurrently with SXSW.

Now 81, Willie is biding his time before joining the festivities, and we’re talking about why he puts on the event every year. In the process, he lets slip that he has something else in the works: a new brand of weed, called, naturally, Willie’s Reserve.

Well, what do you guys think? Are you all in for Willie’s Reserve?