A man in Indonesia[1] was just married. He was furious to find out his bride was not pure as the driven snow. She told him she had been raped by another man one week before their wedding. What’s a disappointed groom to do? Well, he hunted down the guy, cut off his junk, brought it home to lovey and had her cook it for din din. They ate it all gone. There are a couple of problems with this story. Indonesia is huge on Islam these days, so this may have been an Islamist who didn’t get what he was promised on his wedding night. Rage Boy behavior then ensued. Regardless, his innocent bride used to date the guy. My thoughts are that she feared being killed by hubby when he found out her seal was broken and blamed it on the guy. Then things went from bad to worse.[2] Both are now in custody on premeditated murder charges. 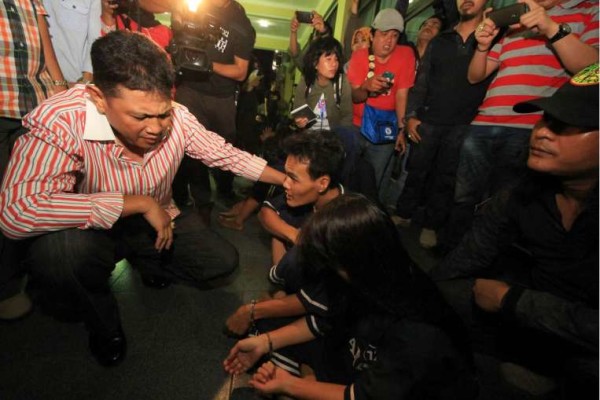 From the Straits Times:

BANDAR LAMPUNG, Indonesia (AFP) – A newlywed Indonesian couple have been arrested over claims they dined on the genitals of the woman’s suspected rapist after her husband allegedly murdered him and cut off his private parts, police said on Tuesday (Nov 17).

The victim’s body was found in a burnt-out van after a suspected revenge attack sparked by claims from the new wife she was raped a week before her wedding on Sumatra island.

The husband, 30-year-old Rudi Efendi, has admitted murdering the man after discovering his wife was not a virgin on their wedding night in September and being told of the alleged rape, but insists he acted alone.

“I was so outraged,” Efendi told reporters after his arrest last month, adding that deciding to eat the victim’s genitals was “to cure my heartache”.

Police say that after murdering the man, Efendi took home the victim’s severed genitals, ordered his 20-year-old wife to cook them, and the pair then ate them together.

The victim was a driver, whom the wife used to date.

Sulistyaningsih, a local police spokeswoman who goes by one name, told AFP: “The case is still under investigation but we strongly suspect that this is a premeditated murder.” The husband is accused of carrying out the murder, while police believe the wife acted as an accomplice.

The victim was found dead in early October in a burnt-out van in Tulangbawang district, Lampung province. Police later arrested Efendi and his wife.

Efendi had ordered his wife to contact the victim and set up a meeting, according to police. But when the victim arrived, he found only Efendi, who then allegedly stabbed him to death, cut off his genitals and set the vehicle on fire.

The husband is claiming this is all his doing and his wifey had nothing to do with it. How noble for a murdering cannibal. After he stabbed the guy to death, he set him on fire in a van. Despite being burnt, it was clear to police that the victim’s body had been mutilated, with a wound on his ear, bruises on his head and his genitals cut off. After the grim deed was done, he took Rudi’s penis home with him where he fried it. “Then I ate his ‘vital tool’,” Efendi told police according to a local report by media outlet, Kompas. He said it soothed his heartache. I’ll bet. Believe it or not, such occurrences in Indonesia are not that uncommon. ISIS has a presence in Indonesia and it is growing as well. Christians are killed there in horrific ways, sometimes by Muslim mobs. They have butchered thousands of Christians there. So, this type of atrocity doesn’t surprise me much. Way to celebrate your nuptials, guys.