This is low even for a snake like Hillary Clinton.[1] The very same day that Justice Antonin Scalia died, Clinton gave a speech in Henderson, Nevada where she pledged she would appoint a liberal Justice to replace him on the High Court. She didn’t wait for his body to cool before she was campaigning on the death of one of the greatest Supreme Court Justices to ever live. Then she doubled down and said that Obama, as sitting president, has the right and duty to appoint the next Justice. No he doesn’t and while Clinton is pontificating that elections have consequences, just wait until the next one goes down. She will never make it into office thank God. Whether she likes it or not, this election indeed will have consequences that she will not like. The Hildabeast will once again have to live with defeat and go to her grave with it. 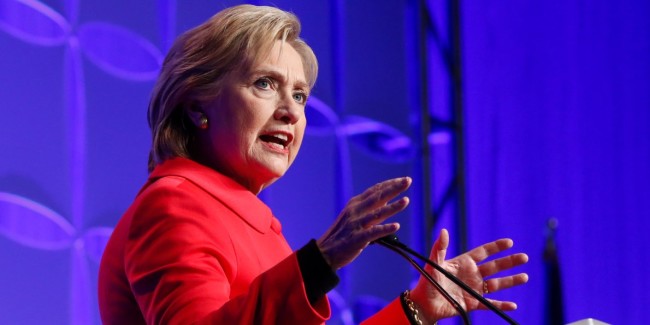 During a campaign speech in Henderson, Nevada, on the afternoon of the very day Scalia died,[3] Clinton pledged that if she were to be elected president, she would replace Scalia with a liberal, reported the Los Angeles Times[4].

Later that same day, mind you, Clinton issued a statement pointing out that President Barack Obama has the right to himself make that nomination.

Clinton might as well be dancing on Scalia’s casket. She’s that gleeful over his death. What a political ghoul. She gave perfunctory condolences to Scalia’s family that she didn’t mean. We all know it. She’s using the death of a great man to get votes. How scuzzy is that? Is that someone who should be allowed anywhere near the presidency? Ever? We must ensure a conservative gets the nomination to the Supreme Court to hold it in balance. Otherwise, it could very well be the end of our Constitution and our Republic. Obama and Clinton were beside themselves with joy over the death of Scalia and they see an opening to pound the last Marxist nail in America’s coffin judicially. The Senate must hold the line here and block the nomination and confirmation until after the election. 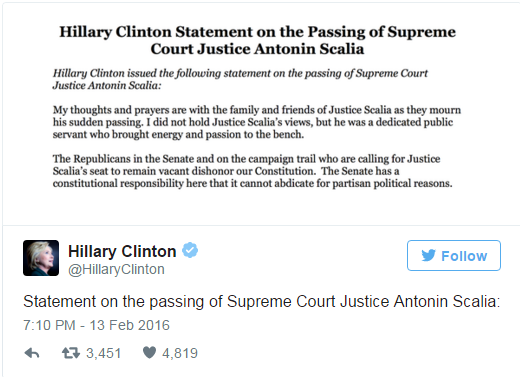