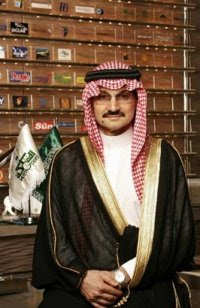 Saudi Prince Alwaleed us usually an apologist for Islamist terrorism. Following the World Trade Center attacks, New York mayor Rudy Giuliani turned down a $10 million donation from Alwaleed for disaster relief after the prince suggested the United States “must address some of the issues that led to such a criminal attack,” and “re-examine its policies in the Middle East.”[1] A year later Al-Waleed donated $27 million to the families of Palestinians during a TV telethon following Israeli operations in the West Bank city of Jenin. The telethon was ordered by Saudi King Fahd to help relatives of Palestinian terrorists.

The Prince has been helping Feisal Abdul Rauf, the Imam behind the ground zero mosque and now in an interview has appealed to the people behind the mosque to find another site not associated with the “wound” of the Sept. 11 attacks.[2]

In interview excerpts published by the Dubai-based Arabian Business magazine, Prince Alwaleed bin Talal was quoted as saying that moving the planned mosque and other facilities would respect the memory of those killed in the 2001 attacks and allow American Muslims to choose a more suitable location.

The comments are reportedly the prince’s first public views on the dispute, which has stirred street protests and fiery debates between religious and political leaders over America’s freedom of worship versus the lingering anger over the 9/11 attacks.

Prince Alwaleed’s Kingdom Foundation has contributed to the group run by New York’s Imam Feisal Abdul Rauf, but said he has given no funds to the planned center.

Prince Alwaleed urged the backers of the proposed Islamic center not to “agitate the wound by saying, ’We need to put the mosque next to the 9/11 site.’”

“Those people behind the mosque have to respect, have to appreciate and have to defer to the people of New York,” the prince was quoted as saying by the magazine, which said the full interview will be published Sunday. “The wound is still there. Just because the wound is healing you can’t say, ’Let’s just go back to where we were pre-9/11.’”

Prince Alwaleed, who chairs a Saudi investment company that has major stakes in international giants News Corp. and Citigroup, also said Muslims in New York should consider a more “dignified” location than the proposed site in lower Manhattan.

“It can’t be next to a bar or a strip club, or in a neighborhood that is not really refined and good. The impression I have is that this mosque is just being inserted and squeezed over there,” he said.

When a Saudi Prince who is an apologist for terror says the builders of the Ground Zero Mosque have gone too far,:  maybe Imam Feisal Abdul Rauf should listen, indeed, perhaps his wife who believes:  the only reason people oppose the location of the mosque is bigotry should listen as well.

In a related story, there are rumors that Keith Olbermann and Bob Beckel will make statements later today bashing the Saudi Prince as a bigot and an Islamophobe. More on that later.