Ten questions Hillary Clinton should be asked but probably never will 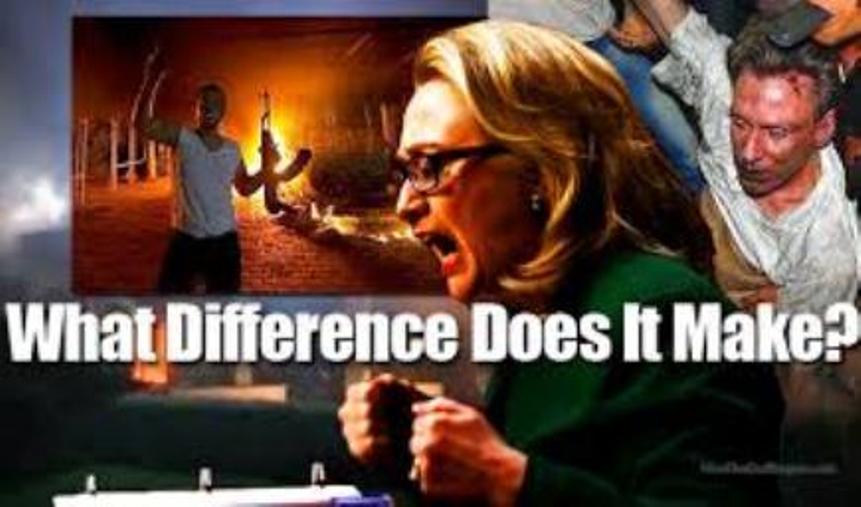 [1]The interview that Hillary Clinton did with Bret Baier & Greta Van Sustren was the equivalent of watching a little league team throw underhand pitches to someone in the Major Leagues. There was very little bark, not much bite, and just a few nibbles. This interview proves that the media is afraid to go after Hillary in fear of being called a bully or sexist. Hillary was allowed to sit there in her bright blue pantsuit and duck, dodge, and deflect. This interview was a golden opportunity to recant her testimony, catch her in her repeated lies, and most important hopefully have her snap on camera. America needs to see the real Hillary Clinton, the angry ex-hippy, with a fuse shorter than President Obama’s attention span when he is reading a teleprompter.

Here are the 10 questions Hillary should have been asked but unfortunately never will.

2. Don’t you think if security details were granted when they were first requested that maybe the Benghazi attack might never have happened and four Americans would still be alive?

3. Why after repeated requests for security did your State Dept and the Administration remove three six man security teams and a sixteen man elite special forces team from Libya?

4. Why did you purposely make the situation in Libya more dangerous by repeatedly denying requests for extra security?

5. With your lackluster performance in the Senate and your abysmal record as Secretary of State why do you think voters should trust you as President when your record clearly shows you are unfit to lead?

6. Have you personally spoke to the families and loved ones of the four men who were brutally murdered on your watch? And if so, when they questioned you on your inaction did you tell them, “What difference does it make!”

7. Why are you, the President, and the entire administration forbidding anyone with first hand knowledge of what really happened in Benghazi from testifying? What is it that you and the administration have to hide?

8. When you had a chance to label Boko Haram as a terrorist group during your failed stint as Secretary of State, you didn’t. Why then should the American people ever trust you with their national security?

9. Did you decide to do this interview because your book is not quite meeting the expectations you had hoped for?

10. You titled your book “Hard Choices”. Did you name it that because it will be a hard choice for voters to support you if you run in 2016? Or did you name it hard choices because that is what you were faced with as Secretary of State and failed to make?

These are the questions Hillary Clinton should have been asked. Once again, we allowed the left to dictate to us what we can ask them. If these questions were asked two things would have happened. The first and most predictable response would have been that Hillary would have walked out of the interview. This would have been great! She would been seen as the limp wristed, weak in the knees, pathetic leader that most people who pay attention know she is. It would have been devastating to her chances which are already slim to none in 2016.

The second best thing that could have happened was she got angry and lashed out on National Television! That would have been worth the price of admission! Either way, she would have been exposed.

If you want to beat the left you have to smack them in the face with an anvil of their own hypocrisy. Conservatives can’t fear these spineless, yellow bellied, talking serpents. They are so easy to defeat its pathetic. Liberals have about enough substance of microscopic pond scum. When you challenge a liberal with common sense and intelligent thought they fold up like a cheap suit and cry one or all of these three things: racism, discrimination, or victimization. Once you figure out their playbook they either cheat, steal, or forfeit the game. If you think these are the questions you would have liked ask please share this article with others. Maybe someone in the Media will act upon it; but don’t hold your breathe.