Democrats are already running around stating that Democrats, mostly (NMP) Obama, have[1] lost[2] on sequestration. Therefore, they’re going to have to come up with more scary stories in order to continue spending willy nilly on pretty much everything at the federal level, which is a great way to continue increases the tangle of tentacles into citizen’s lives and their reliance on Government 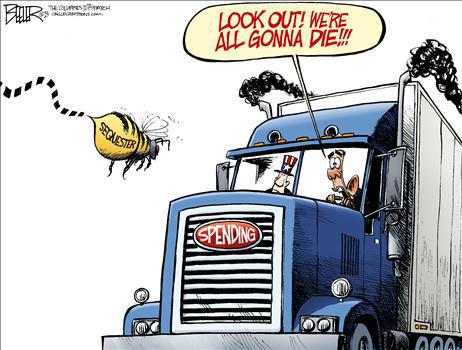 (Think Progress[4])…Unfortunately, though, Congress has shown no willingness to provide similar relief for the families that are being hammered by sequestration in other ways. Here are 12 programs that have experienced devastating cuts because Congress insists on cutting spending when it doesn’t need to[5] – and that have been ignored[6] by the same lawmakers who leaped to action as soon as their trips home were going to take a little longer: (note: head over to TP to see the numbers for costs of these programs)

Let’s consider: a great many of these programs should be paid for by the states. There’s no reason for the federal government to be paying for them. A lot of these reductions could be paid for by cutting waste, of which the federal government is extremely proliferate at performing. The entire thing, except Obamacare, could be paid for by cutting Obamacare. Perhaps we shouldn’t be sending hundreds of millions to Syria and Egypt. Obama could cut out all his taxpayer funded vacations and quick trips across the country for campaign events when he can’t run again. We could stop spending money on illegal aliens. Turtle tunnels. Stop overpaying government employees and providing outrageous pensions. How about not giving $1 billion in tax credits for energy efficient homes to people who do not own a home? Maybe cut[7] “programs to promote video games, chocolate, and to revamp a scuba-diver’s web site.” Or the “$30 million to help Pakistani Mango farmers.” “$10 million for Pakistani Sesame Street.” That kind of list goes on and on and on.

But Obama wanted implementation of Sequestration to intentionally be as painful as possible for the American people. It’s who he is. It’s what he does. And it was all his idea.