The left has done nothing but gin up hatred[1] and violence against President Trump and Republicans for years. Since Trump was elected last year, the calls for assassination and violence have simply been off the charts. Democrats are actively encouraging the killing of Republican officials and the sitting President of the United States. Today, the day after Congressman Scalise was shot by a raving, radical leftist moonbat in Virginia, we wait to hear if he will pass away. He’s had three surgeries so far. A bullet hit him in the hip, then ricocheted off his pelvis, shattering bones and hitting vital organs. Yesterday, he was in critical, but stable condition. Today, President Trump says it is more serious[2] than anyone knows. If he dies, that blood is all over the hands of liberal Democrats.

A nightmare unfolded in the morning sunlight during a Republican baseball practice session in Virginia yesterday. James T. Hodgkinson, a Bernie Sanders supporter, took a rifle and a pistol to the field and started shooting. When it was all said and done, House Majority Whip Steve Scalise was shot in the hip, an aide was shot in the chest, a lobbyist was shot and two officers were wounded. Both the aide and the officers will be fine. The lobbyist who was also shot is the most critically injured, but will survive. The shooter is dead.

I want to share 13 instances of those on the left threatening President Trump and others on the right. I’ll also include video from Keith Olbermann, who is cheerleading The Resistance in his videos for GQ, where he actively calls for violence against President Trump. It’s despicable. Below that, I’ll give you a taste of the hate out there on Twitter. When Jared Lee Loughner shot Gabby Giffords in 2011, the left blamed Sarah Palin and the Tea Party. The right never threatened the left with violence or death. People are saying today that the shooter alone is responsible for trying to kill a bunch of Republicans yesterday and we can no more blame the left than the left should have blamed the right over Giffords. Except that the left is actively calling for violence and assassination. That’s the point that makes the left culpable here. 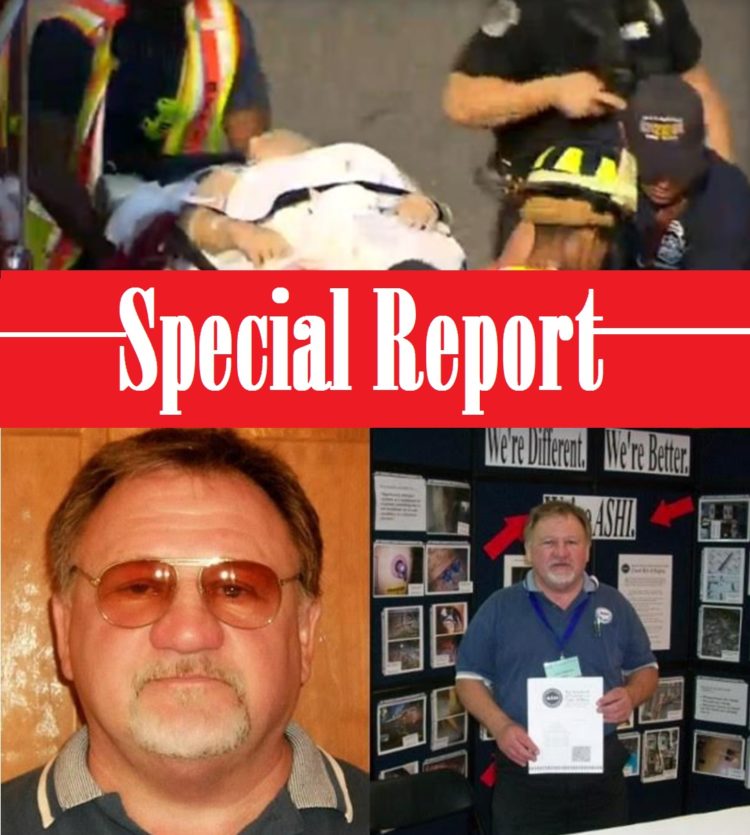 Hollywood has issued dire predictions and hysterical warnings about Donald Trump ever since the Republican businessman first announced his candidacy for the presidency in June 2015.

But the level of vitriol and violent rhetoric against now-President Trump has increased substantially in recent weeks, from comedian Kathy Griffin’s now-famous shock “beheading” photograph[4] to Shakespeare in the Park’s not-at-all-subtle[5] “assassination” of Trump on a stage in New York City’s Central Park.

Unfortunately, Griffin and the director of Julius Caesar are not anomalies in Hollywood; actors, writers, directors, and other celebrities have fantasized about using violence against Trump, his supporters, and other GOP lawmakers for at least the past 18 months.

Here are the celebrities, but if I am counting people condoning violence, I have to also include Barack Obama and Hillary Clinton, who have not come out against any of this and their silence tells you all you need to know here. The list below originated at Breitbart… it’s a great place to start to expose the insane hatred on the left.

Kathy Griffin did a photoshoot with what looked like the bloody decapitated head of President Trump. Since then, she has lost her New Year’s Eve gig with CNN and had to basically cancel her comedy tour. The gag she pulled was instantly reminiscent of ISIS videos and extremely graphic. She has since blamed Trump and says he ‘broke her’ over it. She has doubled down and vowed that she will keep making fun of the President.

Barron Trump was traumatized when he saw the picture on the news and screamed for his mother. He thought it was real. Griffin had also vowed last year to go after 11 year-old Barron as one of her targets.

2. Madonna – “I’ve thought a lot about blowing up the White House.”

At the anti-Trump Women’s March in January, Madonna spouted her hate: “Yes, I’m angry. Yes, I’m outraged. Yes, I have thought an awful lot about blowing up the White House, but I know that this won’t change anything,” she told the crowd to roaring applause. “Are you ready to shake up the world?” Madonna asked. “Welcome to the revolution of love, to the rebellion, to our refusal as women to accept this new age of tyranny, where not just women are in danger but all regionalized people. Where being uniquely different, right now, might truly be considered a crime.” Madonna has held other concerts where she has railed against the President as well.

3. Snoop Dogg “Shoots” Trump in the Head in Music Video

Snoop Dogg did a music video that showed him shooting President Trump in the head and killing him. Trump was dressed like a clown as were most others in the video. There was also drug use, etc. The California rapper had this to say: “I feel like it’s a lot of people making cool records, having fun, partying, but nobody’s dealing with the real issue with this f*cking clown as president, and the sh*t that we dealing with out here, so I wanted to take time out to push pause on a party record and make one of these records for the time being,” the rapper told Billboard.

Robert De Niro, a legendary actor, has a special hatred for President Trump: “He’s a punk, he’s a dog, he’s a pig, he’s a con, he’s a bullsh*t artist, a mutt who doesn’t know what he’s talking about, doesn’t do his homework, doesn’t care, thinks he’s gaming society, doesn’t pay his taxes,” De Niro proclaimed bitterly. “He’s an embarrassment to this country,” he added. “He talks [about] how he wants to punch people in the face… I’d like to punch him in the face.”

Joss Whedon, of FireFly and Buffy the Vampire Slayer fame, has gone totally unhinged over President Trump. He’s just vile. A devout supporter of Hillary Clinton, he also hates Paul Ryan (R-WI). “Violence solves nothing. I want a rhino to f*ck @SpeakerRyan to death with its horn because it’s FUNNY, not because he’s a #GOPmurderbro,” Whedon tweeted. He also tweeted after the election that Trump “CANNOT be allowed a term in office.”

6. Shakespeare in the Park Stabs ‘Trump’ to Death in Performance of ‘Julius Caesar’

New York City’s Public Theater held a production of Julius Caesar as part of their Shakespeare in the Park event. This time it had a twist with Caesar looking an awful lot like President Trump and his wife having a Slavic accent. It was a thinly veiled incitement to assassinate the President and sponsors such as Bank of America and Delta Airlines were quick to pull their funding. They have vowed to go on performing the abomination. Nothing like acting out stabbing a sitting President to death on the Senate floor.

David Simon, who created HBO’s The Wire, was enraged when he heard that President Trump was considering firing Robert Mueller, who is overseeing the Russia investigation. He suggested that Americans “pick up a goddamn brick” if the president followed through. “If Donald Trump fires Robert Mueller and is allowed to do so, pick up a goddamn brick. That’s all that’s left to you,” Simon tweeted June 12th. He laughingly claimed it was not an incitement to violence.

8. Actress Lea DeLaria Threatens to ‘Take Out’ Republicans and Independents with Baseball Bat after Trump Win

Lea DeLaria of the Orange is the New Black has her own suggestion for Trump: “[O]r pick up a baseball bat and take out every f*cking republican and independent I see,” DeLaria wrote, adding the hashtags “#f*cktrump,” “#f*cktheGOP,” #f*ckstraightwhiteamerica” and “#f*ckyourprivilege.” Members of the cast had appeared in an ad for Hillary Clinton during the last election.

One of a number of rappers, YG, threatened Trump during the election in a song called “F*ck Donald Trump,” with lyrics that contained several threats toward the then-candidate. “I like white folks, but I don’t like you/All the n*ggas in the hood wanna fight you/Surprised El Chapo ain’t tried to snipe you/Surprised the Nation of Islam ain’t tried to find you/Have a rally out in L.A., we gon’ f*ck it up,” YG raps in the song. “You vote Trump then you’re prolly on dope/And if your ass do win, you gon’ prolly get smoked,” adds Hussle.

Rocker Marilyn Manson in one of his music videos, portrayed Trump as dead on the ground. He stood over the lifeless form ripping pages out of the Bible. The body is decapitated and in a pool of blood. “It’s about the desperate acts of people who believe something that is preached by an unbeliever,” Manson told the Daily Beast of the explicit visuals in the video.

11. Larry Wilmore Jokes About Suffocating Trump with ‘Pillow They Used to Kill Scalia’

Former late-night host and Daily Show contributor Larry Wilmore joked about suffocating Trump during a segment on his Comedy Central show The Nightly Show. “Anyway, since we’re talking about bigotry, we have to mention Donald Trump,” Wilmore said. “Sorry everyone, I don’t wont to give him any more oxygen. That’s not a euphemism by the way; I mean it literally. Somebody get me the pillow they used to kill Scalia, and I’ll do it. I’ll do it!” He then acted it out and added: “I could get in trouble for that, actually!” But of course, he didn’t.

Stephen Colbert has regularly gone after President Trump and those around him. In February, he did a segment that showed Trump aide Stephen Miller being attacked in various shows. The segment included Miller being beaten by The Walking Dead‘s Negan and his spiked bat, and ended with the Trump aide’s head superimposed onto a spike in a parody of HBO’s Game of Thrones.

Sarah Silverman suggested in February that the military could join with the anti-Trump “resistance” and help overthrow the President. “WAKE UP & JOIN THE RESISTANCE. ONCE THE MILITARY IS W US FASCISTS GET OVERTHROWN. MAD KING & HIS HANDLERS GO BYE BYE,” Silverman tweeted. Silverman, who was one of Vermont Sen. Bernie Sanders’ earliest celebrity supporters, previously compared Trump’s victory to the Great Depression.

Now take a look below at how all this hate metastasizes in our culture and what it brings out in people. You tell me… does the left bear any responsibility for what happened yesterday? John Hawkins also has a list of quotes[6] form liberals calling for violence over time. This has got to stop, but make no mistake about it… most of the calls for violence are coming from the left and it resulted in what happened yesterday.

What's more harmful: Putting millions already on the margins more at-risk via draconian policies, or shooting a racist lawmaker in the hip?

For violent resistance to work it'd need to be organized. Individual acts can be understandable, but likely counterproductive/ineffective.

So Rep. Steve Scalise, who once spoke at a white supremacist event sponsored by David Duke (google it) was SHOT today in Alexandria.

That's a shame but babies blown to bits at Sandy Hook was worse and Scalise takes money from @NRA[12] https://t.co/Dq9Lz9V77C[13]

Do I feel bad about Steve Scalise? Hell no.

If the shooter has a serious health condition then is taking potshots at the GOP house leadership considered self defense?

No group is more vile, contemptuous or dangerous.