Tim Scott has been appointed to fill the South Carolina Senate seat being vacated by the retiring Jim DeMint and immediately the racebaiters jumped in with both feet to attack him. One of the early hatemongers was Amos Brown, a host on a religious radio station in Indianapolis, Indiana. Brown resorted to his Twitter account to claim that African American Tim Scott isn’t really a black man.

It has been reported that South Carolina Governor Nikki Haley will appoint Tim Scott, an African American, to fill DeMint’s seat. Scott is, of course, a Republican just like Governor Haley. All one need be is a black man in the GOP and the hatemongers come out in force with their racist name calling and radio host Amos Brown rose early to the rote attack. 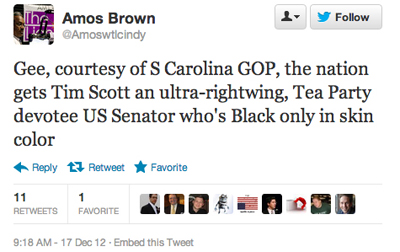 Mr. Amos Brown calls himself a man of God and works for AM 1310, “The Light,”[2] a religious station that caters to the African American community in Indianapolis, Indiana.

Brown has a grandiose description of himself on his Twitter account: “Radio Host,Media Mgr,Columnist,Servant/Leader,Demographer, Chronicler of Indy’s communities, Grandfather, Institutional Memory.”

South Carolina’s Tim Scott is himself quite an interesting man. Not only did he beat Strom Thurmond’ son in a South Carolina primary for Congress in 2010, but now he’s about to ascend to the famous segregationist’s own Senate seat!

In fact, this particular South Carolina Senate seat is a case study in the positive progression of the United States in race relations and equal rights. Thurmond was a famous Southern Democrat segregationist who once ran for president on a racist platform. He then renounced his racist ways and became one of the few racist Democrat “Dixiecrats” to switch to the Republican Party. And now an African American is joining the U.S. Senate in the same seat Thurmond once held. That is quite a progression toward the colorless nation that Martin Luther King had hoped for, isn’t it?

Sadly we still have to overcome the segregationist impulses of racebaiters such as Amos Brown.