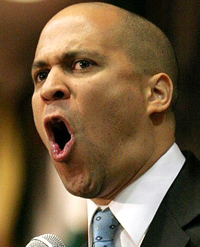 While the media gorges itself on the story of Chris Christie shutting down a bridge one day last year, a real political scandal is brewing in New Jersey filled with corruption, millions in fraud and waste, and a Democrat appointed official pleading the Fifth and the media? Well, the media is ignoring it all.

Even as Newark, New Jersey was laying off policemen and was pleading for more tax money and state bailouts, it has now been discovered that a heavily employed city contractor was stealing millions from the city with crony deals and bribery and it’s all tied to people appointed by Cory Booker–the man many Democrats think might be the “next” Barack Obama. There is even no-work jobs to buddies and other such criminal waste.

All this comes from investigations into a city agency called the Watershed Conservation Development Corporation, an entity that supposedly monitored and managed the city’s 35,000 acres of reservoirs and other water resources.

The Watershed agency was disbanded last year, but not before Booker’s buddies stole millions from the city.

The allegations come from a report issued by the New Jersey Office of the State Comptroller.

“This report documents an egregious and yet preventable abuse of public funds that was allowed to continue unfettered for years because of poor oversight,” said comptroller chief of staff Melissa Liebermann[1].

Linda Watkins-Brashear, the agency’s director and a political ally of former Newark mayor, now Sen. Cory Booker, wrote unreported checks to herself to the tune of $200,000, was awarded $700,000 in two severance packages, gave more than $1 million in contracts to her friends and ex-husband, and lost $500,000 in dubious stock ventures, the report states.

The director of the agency, Linda Watkins-Brashear, is now pleading her protections under the Fifth Amendment and reusing to say anything to investigators. But she did say through her attorney that she didn’t do anything that Senator Booker–who was Newark’s mayor at the time–didn’t know about.

All this vindicates city council members led by Augusto Amador, Ras Baraka, Anibal Ramos and Ron Rice who continually called for investigations of the Watershed agency but could never get anyone to listen.

“As the Chairman of the Council Committee on the Watershed, I now feel vindicated in calling for a State investigation after we sensed that something was wrong,” Amador said in a statement. “The findings confirm my initial claim that there was wrong activity going on at the Watershed and I applaud the work done by former Comptroller Boxer to uncover and bring to justice those who abused public confidence while managing that public agency.”

Baraka said he was not surprised by the comptroller’s findings.

“The Council was suspicious of many things including no bid contracts, operating without a quorum and growing costs,” Baraka said. “And to make matters worse they went court to sue the city for additional funding. This organization grew beyond the city’s control years ago. It needed to be dismantled then. I feel that we were vindicated in this as Councilman Rice and myself were named in lawsuit against them.”

This is the sort of political corruption and criminal fraud that should have the whole media establishment out for Booker’s blood. What did Booker know? Did he get some cash, too? Why didn’t he try to stop any of these crimes?

But it is likely this whole mess will be ignored by the media.

Why? Because Booker is a high profile Democrat and the national media want to protect him.

For more details on the waste and criminal behavior, check out a report at BookerFail.com[2].