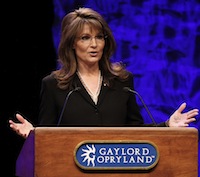 Comparisons are always a great way to show how differently the Old Media treats conservative and leftist politicians in America today and Obama’s nomination of the Elena Kagan to the U.S. Supreme Court gives us another opportunity to see the Old Media’s penchant to excoriate a Republican’s actions while soft peddling and excusing away similar actions by a left-winger.

In this case, it is instructive to see how the Old Media treated the claim that Sarah Palin banned books from the Wasilla library when she was mayor and today how it is treating the recently highlighted Supreme Court arguments made by Elena Kagan that the government could ban books under the McCain-Feingold Act.

After McCain picked Governor Sarah Palin for his number two slot during the 2008 campaign for president the Old Media lit upon a story that said Sarah Palin tried to ban books from the Wasilla library when she was mayor there in 1996. A list of the supposedly banned books was even bandied about by the left-wing blogs causing a ruckus in the media but it turned out the list had books on it published years after Palin had left the Mayor’s office. The list was a fabrication and was lifted from a website that detailed the books that had been banned[1] at one time or another, in one place or another, over the last 100 years.

As it turned out the whole story came from another former Wasilla mayor. He claimed that Palin had asked a Wasilla librarian[2] “how she could go about banning books.” No books were banned, no list was made and Palin said she was asked by a constituent to look into how a book might be removed for its “objectionable material.”

In Sept. of 2008, the McCain campaign stated that the book banning claim was “categorically false[3].” Spokesman Brian Rogers said, “The fact is that as Mayor, Palin never asked anyone to ban a book and not one book was ever banned, period.”

The story was false. Palin banned no books nor did she ask for any to be banned. But the Old Media went after the story with gusto even though it was a wildly overblown, anti-Palin fantasy. And the headlines tell the tale. The Old Media’s headlines as much as stated Palin was a book banner or asked the question in such a leading way as to make folks think she may have been a book banner.

Here are some of those headlines:

Of course, the left-wing blogosphere went nuts for the Palin story. The Daily Kos, the Democratic Underground, Wonkette and other extremist websites played the false story up for days.

To contrast the media’s treatment of the false Palin book-banning story, we can look to the current story about Obama’s SCOTUS nominee, Elena Kagan, who was involved in a case before the Supreme Court in which she affirmed that books, pamphlets and other printed matter could possibly be open for government banning under the McCain-Feingold Act.

In front of the Supreme Court during questions asked of her by the justices about her stance on behalf of the government on Citizens United v. Federal Election Commission, Kagan affirmed that the federal government could ban books[12], though she felt it was unlikely.

Kagan told the justices that, “the government’s view is that although 441b does cover full-length books, that there would be quite good as-applied challenge to any attempt to apply 441b in that context.” Here Kagan assumed that while the federal government posits that the rule does apply to books she felt that since the gov’t has never tried to ban any book publishers might have a good case to reverse that ban. She followed that saying, “the FCC [Federal Election Commission] has never applied 441b in that context. So for 60 years a book has never been at issue.”

In essence her position is that the gov’t can ban books under 441b, but that no one should worry over much because the gov’t has never used that rule to ban a book. As the New York Daily News says in shock[13], “it’s hard to recall the First Amendment hanging by a gossamer as flimsy as that offered by General Kagan.”

So, how has the media treated this story? Mostly by pinning the “accusation” that Kagan thinks the gov’t can ban books to GOP Senator Mitch McConnell as if McConnell is really the one to blame for all this.

Here are some of the current headlines on Kagan, IF you can even find the story — and the fact that so few stories are covering this is also telling when noting that there were thousands of stories covering the Palin book-banning subject.

Just as naturally as was the left-wingers going after the Palin story, the conservative media is hitting the Kagan book ban story, too. The Examiners, NewsMax, Rush Limbaugh and a host of righty blogs are hitting Kagan for her apostasy against free political speech.

Now, take a look at these two collections of headlines. Notice that all the Palin headlines connect Palin directly to the charges of book-banning by discussing her “book banning efforts” even though there were no books banned and no lists made for possible bans. Then look at the Kagan headlines. You’ll notice they all link a Republican to a claim that Kagan wanted to ban books (with one saying that the charge of book-banning is just “talking points”). The way the Kagan headlines are written it makes it seem as if the charge of Kagan’s book-banning is just politics as usual, Republican charges made, just average, everyday Republican attacks. Yet the Palin headlines as much as say that Palin was banning books. With their headlines the Old Media convicted Palin in 2008 yet today Kagan is nearly absolved of the charge.

This is the often times subtle bias that the Old Media employs against conservatives and Republicans and the soft favor they bestow upon Democrats and leftists.