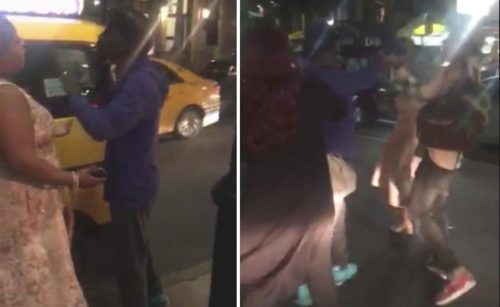 Ashley Sharpton, 30, the daughter of race peddler, Al Sharpton, was arrested in the wee hours of the morning last Saturday, as she was out with friends, celebrating her birthday in New York City. She and some friends got into a cab and each person gave the driver a different destination. In confusion, and in order to wait until the destination was sorted out and decided upon, the driver pulled over to wait.

This didn’t sit well with the entitled Ms. Sharpton, who was sitting in the front seat and proceeded to yank the cabbie’s keys out of the ignition and throw them. The cabbie attempted to retrieve them, but was then punched in the chest by Sharpton, according to video taken by one of Sharpton’s friends. The police were called, but by that time Ashley Sharpton had fled. She was found two hours later and charged with petty larceny and issued a ticket.

Al Sharpton had wished his daughter a happy birthday via Twitter earlier.

Happy Birthday to my youngest, Ashley. A strong black woman and committed activist. So proud to be your Dad. pic.twitter.com/ld7DyVA6CJ[2]

When you’ve been raised to believe the world owes you and you are raised by a parent who believes the world owes him, then this kind of petulant, selfish, obnoxious behavior is the default setting. Instead of sorting out the destination calmly and then instructing the cabbie, this unhinged “soldier for change” as she describes herself on her Twitter account, decided to get nasty, hit the guy and throw his keys. These are the actions of a very immature, rude, entitled person.

She needs to forget community organizing and take a moment to organize and “change” her own self and get her attitude adjusted. Ms. Sharpton, you have no right to attack someone physically and steal his property just because you are mad you and your friends can’t get your acts together. How embarrassing for you. Let’s hope you never get elected to anything. It is quite humorous that her own friend took the damning video that proved she punched the cabbie.

It is said that we will know them by their fruit. It’s clear that being raised by a race baiting activist has some fruit…some rotten fruit. Like father, like daughter. She must believe the rules don’t apply to her, that she can do whatever she wants and get away with it. Well, not so fast. Thankfully, this time she paid the price for her indefensible behavior. Maybe she’ll think about it before doing anything like that again. But probably not. She will likely do something just as rude if things don’t go her way in some future situation. Wonder what dad had to say about her birthday escapades?

Hey Ashley Sharpton, the content of your character is showing. And it isn’t a pretty sight.