Al Sharpton is all about stopping the “hate,” isn’t he? At least that’s what he always claims. So how did he react when his own supporters started calling white people “the devil” when a BBC reporter was interviewing him several years ago? He said whites should “ignore it” and “don’t worry about it.”

Not only did he brush off any worry that his own supporters were indulging in hate, he justified it as understandable because blacks “live in hell” in America and they have a right to call white oppressors the devil. 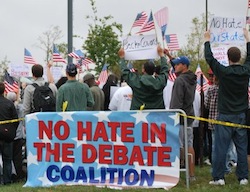 These days the left’s newest *sign du jour is one demanding that conservatives like Glenn Beck, Andrew Breitbart, and Sarah Palin “stop the hate,” as if anyone on the right is actually promulgating “hate.” But where is hate so often emanating from but the left? Worse, the hate from the left is not only ignored by the Old Media, but is justified by the very leftists that claim everyone else is putting on the hate.

Flash forward to today and Sharpton is again making hay about how white people “hate” so much. Sharpton appeared before the New Jersey NAACP state convention in Cherry Hill, New Jersey claiming that the Tea Party movement was built on hate[1].

At the convention Sharpton tried to persuade that we are right back in a situation as bad as pre-civil rights days. “We are in trouble in terms of civil rights in this country,” he absurdly said.

The NAACP also has passed a resolution[2] demanding that “the” Tea Party movement “condemn extremist elements” in their midst.

As Duane Lester of All American Blogger[3] asks, “Will the NAACP do the same? Will they repudiate someone in their ranks who not only tolerates and justifies the use of hate speech, but blames the victim of hate for being upset by its usage?”

*Sign photo as seen at a protest against Glenn Beck at the Right Nation 2010 event in Illinois, Sept. 18th.