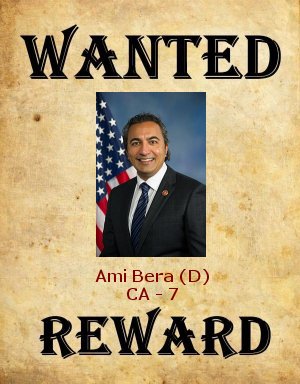 Ami Bera entered Congress with the 2012 elections as a California Democrat in District 7. The 7th District is located just east of California’s capitol city, Sacramento.

Congressman Bera is a member of the “centrist” New Democrat Coalition.”

Born and raised in California, Bera earned both his B.S. and M.D. from the University of California, Irvine.

After graduating from medical school in 1991, he did his residency in internal medicine at California Pacific Medical Center, eventually becoming Chief Resident. Bera went on to practice medicine in the Sacramento area, serving in various leadership roles for MedClinic Medical Group. He then served as Medical Director of Care Management for Mercy Healthcare.

Bera has ties to the 5,000 member strong Sacramento Progressive Alliance (SPA), which is run by Democratic Socialists of America (DSA) members Paul Burke and Duane Campbell.

During Bera’s unsuccessful 2010 run, he was a guest at the Progressive Election Forum, convened by the SPA on October 28, 2010, at Sacramento State University.

The event was sponsored by the Faculty Progressive Alliance, SPA, the Sac State Coalition, CFA-Capitol Chapter and Capitol Area Progressives.

Bera’s co-panelist was Jim Shoch, an Associate Professor of Government at Sacramento State and a former Political Director of DSA.

The SPA endorsed Ami Bera in his successful race in 2012.

Bera was supported in 2012 by the DSA/Institute for Policy Studies-led Progressive Democrats of America (PDA).

The RNs of NNU have found a natural alliance with [PDA activists], who never slow in the fight against austerity to win prosperity for all. RNs and PDA activists joined in campaigns across the country for insurgent progressives like Elizabeth Warren, now Senator-elect from Massachusetts, Medicare for All supporter Ami Bera, soon to be Congressman from California…

According to a New Year 2013 press release from PDA, Bera was a “friend” of the organization and would be hosting a PDA delegation on Capitol Hill:

Progressive Democrats of America accomplished a lot in 2012 — thanks to your help and support. Together, we helped defeat Tea Party extremists and helped elect strong progressives to Congress. We educated members of Congress every month in our home districts, and in the halls of Congress in Washington, DC. Now, PDA is starting 2013 in a big way!

In just a few days, on January 3rd, our team will be on Capitol Hill as special guests of our newly elected and re-elected progressive candidates including our board members our friends Representatives Alan Grayson, Dr. Ami Bera, and Mark Pocan…

Council for a Livable World, 2012 Victory