A consensus seems to have been reached across the network/cable/dish television sphere that Newt Gingrich’s unexpected success in the South Carolina primary was due to his being angry at and telling off members of the “elite media” during the two South Carolina GOP Debates.

The “elite media”? What the heck is the “elite media”? Does that include CNN, who intentionally used subconscious visual and verbal propaganda, consistently and repeatedly trying to tie the GOP to the south? (Read: Forget American history, the GOP is the racist Party) However, I digress.

While its true that there was a very strong element of displeasure within the former Speaker’s replies to Juan Williams of FOX News and especially CNN’s John King, this observation misses the true, underlying reason for Gingrich’s sudden surge in popularity.

Consider South Carolina. They had a big Tea Party victory in 2010 with the election of Nikki Haley as Governor. Then, Governor Haley endorsed Mitt Romney, the GOP establishment’s candidate. Factor in Romney’s inexplicable failure to answer questions he should have seen coming years ago and you begin to get an idea of what happened.

The main reason Newt Gingrich surged in South Carolina, and is now surging in Florida is his ability to articulate the difference between the Conservative and “progressive” visions for America. 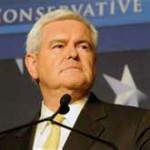 The American idea, the shot heard round the world, is that We The People can govern ourselves. By the Laws of Nature and of Nature’s God we are entitled, by virtue of our humanity, to the maximum amount of Individual Liberties consistent with law and order, and to the Right of private ownership, not the least of which is the Right to own and decide for ourselves. These Liberties and Rights are to be equally protected by a Constitutionally limited, representative government that derives its just powers from the consent of the governed. This is a distinctly exceptional American idea.

The “progressive” idea is that an all-powerful centrally planned government, with extreme hostility towards private ownership, forces redistribution of wealth through “progressive” policies in the name of social or economic “justice”. In order to ensure “fairness”, an oligarchy of self-imagined, self appointed “intellectual elite” must be responsible for controlling businesses, industries and “the masses”, who’re incapable of governing themselves. This idea came to America from Britain’s Fabian Socialists and Germany’s Frankfurt School. This is a European idea, not an American one.

There’s a palpable hunger in America for a return to the original intent and First Principles of our Founding Fathers. Why else do you think the Tea Party exists? Or are you one of those unfortunate souls who swallowed the “because they’re racists and can’t stand having a black President” lie hook, line and sinker?

Republicans and Democrats who seek to maintain the status quo better respect the Tea Party. We surround you.