Poor, misunderstood Anthony Weiner… what’s a perv to do?[1] He gets caught not once, but twice, exposing himself in sexting scandals and where does he go to work? For a PR firm. You betcha. Who’s brilliant idea was that one? The Sharknado 3 star just can’t keep his ever-loving trap shut either. He has to snark at everyone. He knew why he was being forced to resign and then he did what Weiner always does… he lied to save face. He claimed no one told him; that he wasn’t consulted… despite people coming forth and clarifying his lies by saying he knew exactly what was going down. Anthony Weiner is a pathological liar and a sex addict. He’s also one of the most brazen narcissists out there. He’s bad for anyone’s image, much less a PR firm. The firm ousted him because of the Hillary Clinton scandal getting too hot. More bad PR for them over Weiner’s wife Huma Abedin. Just toxic. 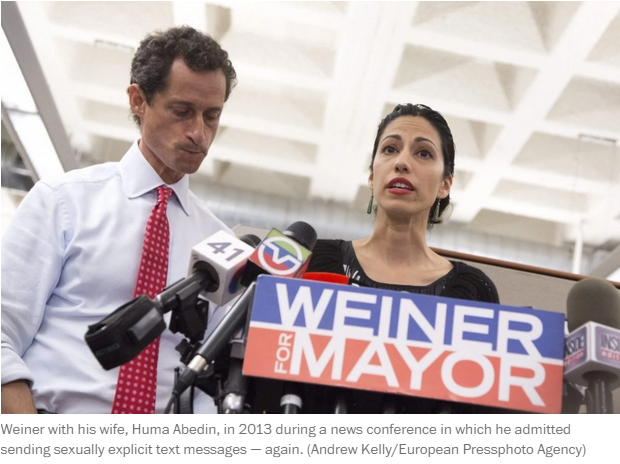 It’s hard to keep up with the ever-evolving career of private citizen Anthony Weiner. Before he resigned from Congress in 2011 after a sexting scandal that never seemed to end, he was a rising Democratic star known for his fiery denunciations of lawmakers who dared put budget concerns before the rights of Sept. 11 first responders[3].

But after it was revealed that Weiner had revealed parts of his nether regions in Twitter messages, things changed.

First, Weiner tried consulting[4]. Then came another sexting scandal, a failed bid to become New York’s mayor, and a more successful bid to become a full-time Twitter personality and a part-time political commentator[5]. There was also, of course, that appearance in “Sharknado 3[6].”

And now, Weiner has exited a high-profile job at a public relations firm less than two months after it began.

“He understands that his presence here has created noise and distraction that just isn’t helpful,” MWW chief executive Michael Kempner wrote in an internal memo, as the New York Post reported[7].

MWW is the New Jersey-based PR firm that threw in its lot with Weiner in July. The company has represented a number of well known brands[8] and is a familiar player in the field. The Washington Post, for example, asked an MWW social strategist to dissect an Uber executive’s Twitter rant last year[9].

Yet two moons brought great changes. Not everyone at MWW, it seems, was happy about Weiner’s presence. One executive, put off by Weiner’s Democratic politics, quit after a charged Twitter exchange with Weiner just last month.

“In related news, George Pataki hasn’t been seen all day,” Weiner tweeted on Aug. 28[10] — an apparent joke about New York’s former Republican governor after it was reported that Carly Fiorina’s campaign car hit a deer in Iowa.

MWW’s Arthur Schwartz struck back with quite the zinger.

“In unrelated news, @GovernorPataki is a man of honor and integrity,”Schwartz wrote[11]. “And you’re … well, you’re @anthonyweiner.”

Schwartz — a Republican in a firm dominated by Democrats — left MMW shortly after the exchange, as the New York Post reported[12].

“This is a direct reaction from Arthur’s business associates being uncomfortable with Anthony Weiner,” O’Brien Murray, a consultant and “Schwartz associate,” told the paper[13]. “Corporations don’t want the image of working with a firm that is affiliated with Anthony Weiner.”

The media, meanwhile, just wouldn’t let Weiner get on with his life.

“The continuous noise from these parties has caused both Anthony and the MWW team to have to deal with many inflammatory, insulting and false stories,” CEO Kempner wrote in his memo[14].

Though Weiner is the veteran of two major sex scandals who might be expected to know that silence is golden, the former congressman took to Twitter — to dispute MWW’s version of events.

“I read the mww statement when they sent it to staff,” Weiner wrote in a message to Politico NJ[15]. “I was either not consulted or ignored on every part of this excellent summer adventure.”

If characterizing a potentially career-rehabilitating gig as “a summer adventure” wasn’t potentially damaging enough, Weiner took to Twitter after this quote appeared to, it seemed, make a joke about it.

“I insist on being consulted and then ignored, thank you very much,” he wrote[16].

The New York Post, citing an unnamed individual, disputed that Weiner was surprised by the memo. The individual said Weiner was up against a wall at the PR firm — and voiced a desire to start his own.

“Anthony has been talking about his departure with MWW for days,” the individual said[17]. “It was strongly suggested he resign, so he didn’t really have a choice. He was the one who came up for the reason for his departure, starting his own company. This isn’t a surprise to him.”

Indeed, in his internal memo, Kempner said Weiner’s new venture would be focused on “tackling some of the structural problems of the New York State Constitution.” Weiner wrote an op-ed on this subject in the New York Times[18]just last month.

“I need a PR company to recover from working for a PR company,” Weiner told Politico[19]. “Go figure.”

And hanging over all of Weiner’s tribulations is his connection to the Clintons. Weiner is married to Huma Abedin, a woman Hillary Clinton has described as “a second daughter[20].” Weiner has reportedly been told to stay away from Clinton fundraisers[21] as the former first lady runs for president.

The connection was not lost on Republican candidate Donald Trump, who has called Weiner a “perv” and questioned why he is in the Clintons’ orbit.

“[Abedin] is receiving this very, very important information and giving it to Hillary,” Trump told CNN[22]. “Well, who else is she giving it to? Her husband has serious problems, and on top of that, he now works for a public relations firm. So how can she be married to this guy who’s got these major problems?”

Trump has rightfully labeled Weiner as a ‘perv.’ It’s a fitting descriptor of a man who thinks he’s God’s gift to everyone out there. He’s also a security risk for anyone that is connected to him. Including his Muslim Brotherhood-entangled wife, Huma Abedin. She has enough to worry about with keeping her lies straight for Hillary and keeping her butt out of jail. The last thing she needs right now is for her horn-dog hubby to go rogue out there and make another scene. But here we are. Clinton won’t even allow Weiner anywhere near her fundraisers. He’s been banned and in this instance, I don’t blame the Hildabeast. All of them are dirty and corrupt – thugs of a feather. Weiner didn’t even last two months, but he shouldn’t have been at a PR firm at all. That’s just a perverse joke. Wave goodbye to Anthony as he embarks on his next excellent adventure. Maybe if we are very lucky, he’ll just go away.