Los Angeles Mayor Antonio Villaraigosa is a long-time supporter of the current occupier in chief.:  Over the course of the past year Villaraigosa 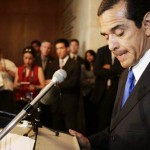 [1]has done no less than 20 official or campaign events on the White House’s behalf.:  He will be in the national spotlight when he gavels the opening of the 2012 Democratic National Convention in September.

Questions are already being raised about whether Villaraigosa, mayor of the country’s second largest city and part of the rapidly growing Hispanic population, has presidential aspirations.

“The answer is no. : The job I’ve said to people I would like is I would like to be governor of the state of California” he said.

As did his hero during the 2008 presidential campaign, Villaraigosa demonstrates enough politically savvy to paint himself as a centrist. : He has publically expressed support for the Simpson-Bowles Commission and concerns over the strength of government sector unions.:  Much like those of his idol in the White House, Villaraigosa’s expressions of concern are empty rhetoric.

In the state of California, a growing number of cities are teetering on the brink of or have already filed for bankruptcy.:  Mammoth Lakes, Vallejo, Stockton, Compton, Bell and San Bernardino are all guilty of mishandling their finances.:  They have spent years shuffling monies from fund to fund in attempts to hide huge budget deficits.:  The city of Los Angeles is right there with them.

“The enemy is algebra” says San Jose city councilman Sam Liccardo, a Democrat.: :  “The fact is the unions own the Democratic Party” he said.:  Government employee unions call the shots for the Democratic Party in California.:  California’s widespread, growing fiscal problems are directly tied to the corrupt quid quo pro relationship between government sector unions, the Democratic politicians they elect, and the ballooning costs of government sector union salaries, benefits and pensions.:  “Party orthodoxy is much more strictly enforced at the state level, because the unions decide who wins and who loses” said Liccardo.

There is a solution: San Diego, a California city that is projecting five years of budget surpluses, addressed their biggest fiscal concern by switching most of its government union pensions to a 401(k)-style plan. 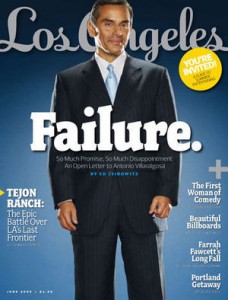 [2]Villaraigosa talks tough about fiscal matters and reining in the power of government sector unions, but as mayor of Los Angeles, his actions belied his words.:  As mayor of the country’s second largest city, Villaraigosa has never led any such action, has never made any such attempt, never proposed any such policy.

Villaraigosa caused great concern when he openly spoke of bankruptcy in regards to the fiscal future of Los Angeles.:  Says Kevin James, a stalwart Republican fiscal Conservative running to replace him: “He says a bankruptcy won’t happen under his watch, but his watch is over in a few months. He didn’t say anything about what happens after that.”

Do not be misled by the centrist smokescreen.:  Villaraigosa is as “progressive” as Democrats come, which is to say that he is as much a radical fringe leftist as are House Minority Leader Nancy Pelosi and the current Oval Office occupant.:  The outgoing L.A. mayor’s expressed support for Simpson-Bowles is undoubtedly rooted in the Commissions’ willingness to raise taxes…not exactly a trail blazing innovative position for a “progressive” to take.

Villaraigosa has been a corrupt, free spending, fiscally irresponsible mayor in Los Angeles.:  Despite protestations to the contrary, there is no evidence to support the conclusion that he would make anything but an equally disastrous choice for either governor or president.