Arizona Gov. Says Donald Trump’s Immigration Talk is ‘Telling It Like it Really, Truly Is’

Arizona Governor Jan Brewer is not one of those pliant, pandering Republicans looking to attack Donald Trump for what he’s been saying about the criminals, murderers, rapists and thieves who have been flooding across our southern border. No way! For Brewer, Trump is 100 percent right about what is going on at our border. 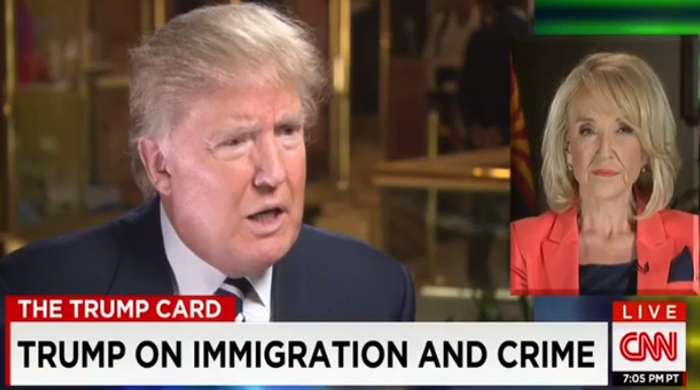 Brewer should know, too. She has been dealing with these criminals for years as governor of Arizona, one of our border states. She knows Trump is telling the truth[1].

Although he’s been villified by amnesty advocates, business tycoon Donald Trump is right about the problems, including crime, caused by people crossing into the United States illegally, says the former governor of Arizona.

“I believe that Mr. Trump is kind of telling it like it really, truly is,” Republican Jan Brewer told CNN’s Don Lemon Wednesday night. “You know, being the governor of (Arizona), the gateway of illegal immigration for six years, we had to deal with a lot of things.

“I think that the people of Arizona realize that we picked up the tab for the majority of the violence that comes across to our border with regards to the drug cartels, the smugglers, the drop houses. It has been horrendous. And, of course, they come through Arizona and therefore, end up in other states and go throughout the country.”

…Brewer, speaking to CNN after Trump’s interview aired, said, “I think everybody knows that he’s right in regards to that — the coming across our border.”

She said only one in four illegal aliens is apprehended at the border. “So, we don’t even know how many are here.”

Asked if Trump should “change his tone,” Brewer admitted she hasn’t heard everything he’s said. “I just know what I have lived through, being resident and governor of the State of Arizona. That we have a horrendous problem. And we’ve got an illegal immigration problem in our country. And I think the people overwhelmingly understand and realize that. And we have to find a solution, and that solution is getting our border secured so we can deal with the other issues.”

So, stop pandering to criminals, Republicans. I’m looking at you Rick Perry and Jeb Bush. Trump is right on immigration. Face it and accept the truth.