A baker in Austria earned himself some criticism by trying to make a political statement about German politics with a cake he made depicting plans slamming into the Twin Towers. Yeah, it was a TERRIBLE idea! 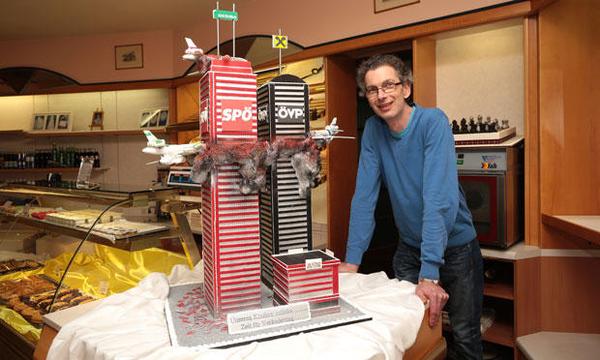 The baker, a fellow named Thomas Kienbauer, said[1] he wasn’t trying to offend victims of the terror attacks, but only meant to shine a light on today’s political situation in Germany. It was a commnet on modern politics, not Islamist terror.

Kienbauer’s version of the Twin Towers depicts one tower colored red, representing Austria’s Social Democrats, and the other tower colored black, representing the People’s Party. The planes also represent Austrian political parties – the Greens and the Freedom Party – and an additional plane atop the red tower represents Austrian liberals.

“Sometimes, you have to present an exaggerated view of the situation if you really want to make a point,” Kienbauer told Kronen Zeitung. The majority of Austrians voicing their opinions on social media did not seem to agree. One commentor said, “Social Democrats and People’s Party as twin towers? The Greens and the Freedom Party as planes? 9/11 as cake? That’s unbelievable!”

But many were offended anyway… as you can imagine.

“This made me almost physically sick. Everything lumped together. Unbelievable,” said another person. The cake attracted plenty more hostile comments as it made the rounds on Twitter and other social media outlets. Kienbauer, jumping to his own defense, claims that he never meant to offend anyone. Rather, he simply wanted to make a statement about the current balance of power in Austrian politics. Considering the public outcry surrounding his “art,” it does not seem likely that he achieved his goal.