It looks like Republicans[1] that are insiders and those who aren’t are all beginning to believe that Donald Trump may just win the nomination. Democrats are basically wetting themselves and whimpering in a corner somewhere. 81% of Republican insiders now say that Trump has a real shot at walking away with the nomination. They are shocked that an outsider has come this far and stayed in the lead the way he has. Predictions of Trump’s demise were greatly exaggerated it would seem. A number of these Republicans who made Trump sign a loyalty pledge are now saying if he gets the nod, a third party will be born. Tsk, tsk… that’s not playing by the rules boys. 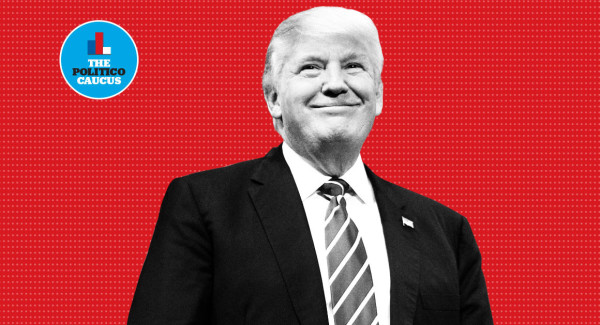 The odds that Donald Trump wins the Republican presidential nomination are going up.

Eighty-one percent of Republican insiders say the likelihood that Trump becomes their party’s nominee is more today than it was a month ago, and 79 percent of Democrats said the same. That’s according to the POLITICO Caucus, our weekly bipartisan survey of top strategists, operatives and activists in the early-voting states of Iowa, New Hampshire, South Carolina and Nevada.

“I can’t even describe the lunacy of him as our nominee. But reason has not applied to date in this race, and my hopes are fleeting that it will ever surface,” lamented an Iowa Republican, who like all participants was granted anonymity in order to speak freely.

“Predictions of his demise keep not coming true,” added a New Hampshire Republican.

Asserted a South Carolina Republican, “Donald Trump being the GOP nominee is now within the realm of possibility.”

Twenty-two percent of Caucus Republicans said Trump has a 50-50 shot at becoming the Republican nominee; the same percentage said he has a 30 percent chance. The rest of the respondents were divided, with the majority saying his odds are still less than 50 percent. But more than 8-in-10 GOP respondents said those are better odds than they gave Trump a month ago.

The results are notable because they represent a big shift in the thinking of POLITICO Caucus insiders, who this summer were deeply[3] skeptical[4] of Trump’s staying power.

“Trump will be among 3-4 finalists well into April; of that there is no doubt,” an Iowa Republican said.

Added a New Hampshire Republican, who like all participants responded via an online survey: “Numbers are numbers and you have to give them credence. I remain skeptical that he has the ability to turn people out, come primary day, but I [have] been wrong about this campaign every step of the way so far.”

Several insiders pointed to both Trump’s persistent leads in polls and evidence of organization on the ground.

“I think he’s now mounting a serious campaign,” a South Carolina Republican said. “His stump speech had matured and even though the novelty of his candidacy is wearing off, his straight talk is appealing to people who are so sick of being lied to by the political class.”

Another Iowa Republican agreed, saying, “The more time that goes by that he continues to lead — the more likely it is he wins. That simple. Also, comparatively, he is building a real campaign. More so than many others.”
“Not sure why anyone should be so surprised that Trump’s campaign is getting so serious in terms of infrastructure build-out,” a New Hampshire Democrat said. “Trump may be a jerk, but he is an extremely successful jerk. He has the means and the smarts to compete everywhere — and he is not slowing down.”

That’s not the case in Nevada, noted several Republicans there, who said they see little evidence of a strong Trump ground game there.

But, one Republican from that state admonished: “He has demonstrated that he is durable in a way that Herman Cain, Michele [Bachmann] and Newt Gingrich were not. … A lot can happen in the next few months, but it is time for everyone to stop whistling past the graveyard and realize that this is real and he could be our standard-bearer.”

However, several insiders also predict that, though his odds have improved, the rest of the Republican Party will coalesce against him if he still appears to be a serious contender for the nomination when voting begins.

“Maybe, just maybe, Trump wins an early contest or two. That will trigger a much stronger Stop Trump movement,” a New Hampshire Republican said. “The party will nominate Bob Dole — in 2016 — before it will nominate Trump. And a Trump nomination would result in a third candidate emerging.”

Several insiders also said Trump couldn’t withstand waves of scrutiny stemming from attacks launched by super PACs and big donors that, they said, may be just around the corner.

“The summer of Trump has lasted longer than conventional wisdom suggested it would,” a South Carolina Republican said. “It’s going to take a sustained, multi-pronged paid media effort to educate voters that Trump is not a conservative and has flip-flopped on practically every issue. Major donors are quickly getting to the place where they are ready to fund such an effort.”

The latest Rasmussen Reports[5] national telephone survey finds that 74% of Likely Republican Voters believe Trump is likely to end up as the GOP nominee, with 34% saying it is Very Likely. The overall finding is a 16-point jump from a week ago and up eight points from Trump’s previous high among Republicans of 66% in early September. This is also the highest number to date who see a Trump nomination as Very Likely. That is a massive jump. You won’t hear it touted that way… it will be down-played by most of the talking heads, but that is epic. Just 23% of GOP voters say “The Donald” is unlikely to capture the Republican nomination. When Trump first announced his candidacy in mid-June, just 27% of Republicans felt his nomination was likely. Among all likely voters, 57% say Trump is likely to be the Republican presidential nominee, with 22% who view it as Very Likely. Both these findings are also record highs since Rasmussen Reports began the weekly Trump Change survey in mid-August. Thirty-nine percent (39%) still say Trump is not likely to win the nomination, with 16% who say it is Not At All Likely. Trump is still financing himself and releasing policies when no one else has. I don’t see how he can be derailed at this point. But it is sure fun to watch the Marxist Democrats and the RINOs have seizures over his campaign.