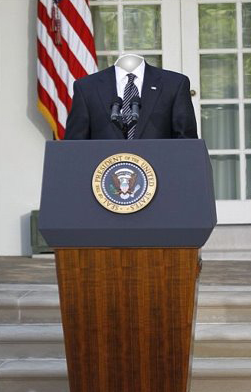 Why is Obama so scared of his most supportive constituency? : No, I’m not talking about African-Americans (waiting on: Touré in 3..2..1.), but the media. : Obama was the media’s golden boy. : A person who could do no wrong in the White House. : AllahPundit of HotAir posted today the possible reasons[2] why Obama is fleeing from the media in a fast and furious fashion. Starting with “one: There are very few truly undecided voters out there, possibly as little as: three to five percent[3]: of the electorate. Two: There are a lot of: unlikely: voters out there who are well disposed to him[4]: but who need some strong motivation to turn out. Three: If he does an interview or press conference with professional political reporters, he’s inevitably going to be asked about, oh, say,: this[5].” : I agree that fact that unemployment rose in 44 out of :  50 states, isn’t something you want to explain to WH press corps.

However, what’s interesting is the fact that Obama snubbed Chris Matthews for an interview. : Yes, the man who call Obama ‘the perfect man[6]‘ got shafted.

Obama… declined an interview with the friendliest liberal outlet on television. Earlier this month, MSNBC’s Chuck Todd sat down with Mitt Romney for a one-on-one interview that will be featured in an hourlong MSNBC documentary that will air prior to the Republican convention.: MSNBC’s Chris Matthews, who has been very public about his support for Obama, was not granted an interview with the president for the network’s Obama documentary, which will run prior to the Democratic convention. The White House offered Biden instead.

This is a joke. : Obama has no time to talk to the press or Chris Matthews, yet he: has time to talk to reporters from Entertainment Tonight and People Magazine.[7]:  He also had time to for this ‘tough interview with KOBFM in New Mexico. : Although, we did find out what superhuman ability Barack Obama would like to possess. : No, it’s wasn’t mind control.