Appearing on “Meet The Press” Republican presidential candidate Ben Carson said that people should stop using this idiotic “black lives matter” nonsense. He said it is “silly” and “divisive.” 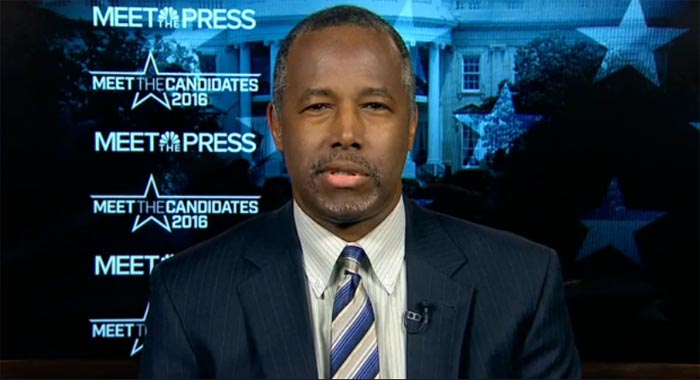 Carson said[1] that the nation needs to talk about “real issues” and this “black lives matters” foolishness is not a real issue.

“We need to talk about what the real issues are and not get caught up in silliness like this matters or that matters,” he said. “Of course all lives matter. I don’t want to get into it. It’s so silly.”

On Sunday, Carson denied that he called the movement itself “silly” and clarified that he thinks the distinction between “black lives matter” and “all lives matter” is “political correctness going amuck.”

“Well, you know, I don’t recall calling it silly, but what I called silly is political correctness going amuck. That’s what’s silly. When, you know, I guess it was Martin O’Malley who said, you know, ‘Black lives matter, white lives matter.’ He got in trouble for that and had to apologize. That’s what I’m talking about is silly,” Carson said on NBC’s “Meet the Press.”

Carson added: “Of course all lives matter, and of course we should be very concerned about what’s going on, particularly in our inner cities. It’s a crime, you know, for a young black man, the most likely cause of death is homicide. That is a huge problem that we need to address in a very serious way.”