Bill Ayers: Obama Should be Tried for War Crimes

Former domestic terrorist and liberal educator Bill Ayers may think Obama is a charming and likable but he still thinks he should be tried for war crimes over his drone program and his military campaigns in Afghanistan and other places. 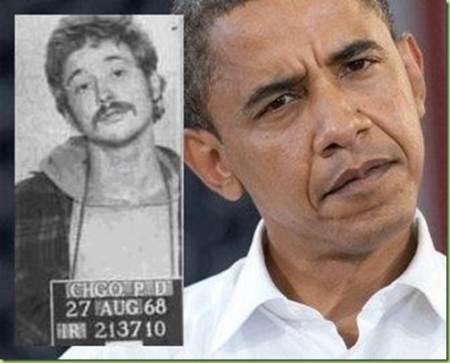 In a continuing video series called the RCP Morning Commute[2], where well-known Chicagoans and folks in the news take a “morning commute” drive with the Charlie Stone and Tom Bevan of Real Clear Politics, Bill Ayers made his assessment of the Obama presidency. And he wasn’t wholly complimentary.

When asked to grade the President’s term in office, the infamous educator proclaimed Obama’s presidency a failure. “I’d give him a failing grade,” Ayers said.

Ayers went on to say he feels that Obama is a “moderate” and that he campaigned that way so no one should be surprised by the President’s actions in office.

But even with all this happy talk about how much he likes Obama on a personal level, Bill Ayers still thinks he should be brought up on charges of war crimes.

RCP’s Charlie Stone asked Ayers about Obama’s usage of drones. “You hold Johnson with disdain, you hold Bush, Nixon with disdain but isn’t Barack Obama, as the sole authority for drone use, engaged in terrorist activity?”

“Absolutely,” Ayers said. He then said we should protest Obama’s actions saying, “…the response is to oppose it. To stand up in opposition.”

“Do you think Barack Obama should be put on trial for war crimes,” Stone asked.

“Absolutely,” Ayers replied. “Every president in this century should be put on trial. Every one of them, for war crimes.”

Presumably Ayers meant in the modern era as opposed to “this century” as this century is only 13 years old, but the message is clear. Every president, at least those in his own life time, are “war criminals” as far as Bill Ayers is concerned.

He concluded saying, “Every one of them goes into office, an office dripping with blood, and adds to it. And, yes, I think that these are war crimes, I think they’re acts of terror.”