If [the unborn would only] die[1], they had better do it [early], and decrease the surplus population. Quote modified with apologies to Ebenezer Scrooge to fit the burgeoning Marxist utopia of Comrade de Blasio. To keep the population down to micro-manageable levels. So, New York’s elected elite are all standing arm in arm to defend the butchers of Planned Parenthood. How endearing in a Mengele sort of way. Just think what they have planned for the rest of New York. Now, you are considered an extremist if you want to protect live babies from being torn limb from limb. Color me revolutionary. 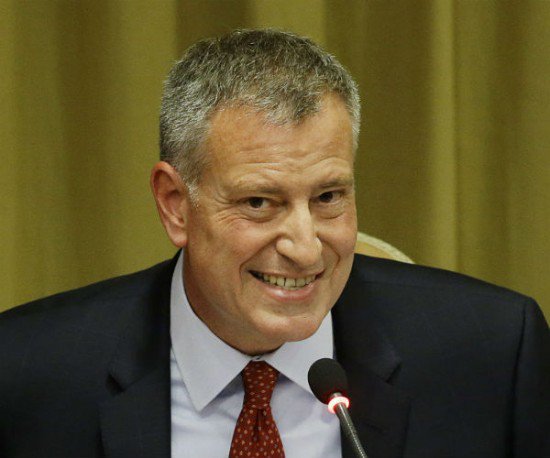 The city’s top elected officials are going to bat for embattled Planned Parenthood.

All four city-wide elected officials have made videos in support of Planned Parenthood, with Mayor de Blasio accusing “anti-abortion extremists” of attacking the health care operator.

A grim De Blasio said he will fight to make sure Planned Parenthood remains protected.

“Once again, Planned Parenthood has come under attack by anti-abortion extremists,” de Blasio says in his minute- long video, released on Friday.

“Opponents of the organization deceive the public, make false changes, and intimidate women and their doctors in the hope of banning all legal abortion and cutting women off from critically needed healthcare.”

The anti-abortion group Center for Medical Progress has released four videos in which Planned Parenthood employees appear to be negotiating the price of fetal tissue, used for research.

Planned Parenthood has said they don’t make a profit off the tissue, but are reimbursed for costs.

Remember kiddies, for today’s “Two Minutes of Hate,” the slogan is kill all the unborn you can and sell off the parts for profit. Protect murderous ghouls at all costs, but serve up babies on pikes. What about healthcare for those about to be born? Or those that are partially born and then ripped asunder? These politicians are claiming the necessity of funding because of the many people Planned Parenthood helps. Helps to do what? Slaughter the innocent? Then make a profit on limbs and organs taken from a child whose skull is crushed in the birth canal and their brains are sucked out – while they are still alive? These are monsters defending monsters. These are people with no souls, no conscience, no morality. Meet the Frankensteins of New York who empower the butchers of Planned Parenthood.