Maher should know about has-beens and dicks[1]. I mean, he is both. Seriously… does anyone think this evil moonbat is funny? He’s detestable. He’s right on one thing though, Bruce (I refuse to call him Caitlyn) Jenner is not Rosa Parks. I don’t think he really knows who he is. He seems to have been confused his whole life. He went from Olympic gold medalist, to reality TV patriarch, to a woman and a joke in the span of his lifetime. Now, he’s landed a lucrative cosmetic gig at the hot age of 65. And America is fixated on this farce. Because no one wants to pay attention to our rights being shredded or to an impending World War when you can watch a rich athlete, who has scuzzy celebrities for family, morph into a woman and the icon for transgenderism. Wow, now I really get why Rome fell. 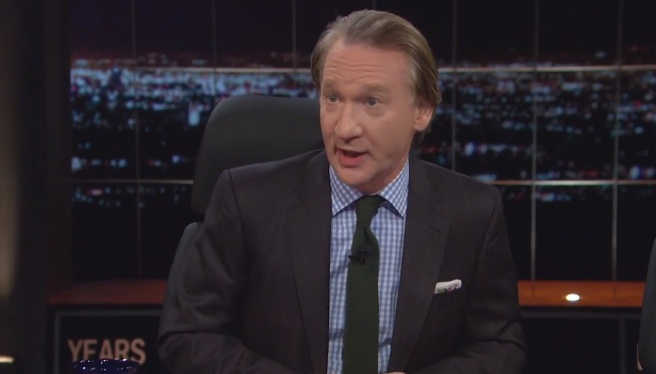 Bill Maher wasted no time Friday night ribbing the intense praise Caitlyn Jenner has received since making her debut on the cover of Vanity Fair[2], saying she’s “not Rosa Parks.”

Jenner was formally the patriarch of the reality television family, and Maher stumbled over which pronoun was appropriate to use during his opening monologue. After referring to Jenner as a “he,” Maher instructed the “pronoun police” that ”if you’re going to climb up my ass, while you’re up there, you can kiss it.”

“Rush says if you want to make your penis disappear, do it the old way like I did — have your belly fat cover it up,” Maher said.

Maher just loves to offend everyone. But while he’s telling others to kiss his arse, he can kiss mine. He’s an unfunny, evil little goblin clown with his own car. I just love the way he goes on about Jenner and smears Limbaugh while he’s at it. But if he’s going to talk about making his Johnson disappear, he doesn’t need to. He doesn’t have one – he just is one. His audience laughs and applauds away at his crassness. Before calling others perverts and freaks the way he does of Hastert and the Duggars (while slamming Christianity), he should take a long look in the mirror. His schtick covered transgenders, gays, child molesters, female Viagra and politics. What wholesome entertainment from an ignorant, twisted little man. It disturbs me that so many watch him and it speaks volumes on the degradation of America.