Black Pastors Call For The Impeachment Of Eric Holder

They’re right that Eric Holder is a lawless Attorney General who richly deserves to be impeached[1]. 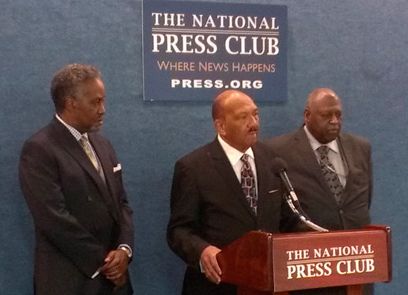 A coalition of African American civil rights leaders and pastors today said they will launch a grassroots effort seeking to secure the signatures of one million people calling for Attorney General Eric Holder to be impeached. The Coalition of African American Pastors (CAAP) cited numerous instances of Holder attempting to impose same-sex ‘marriage’ throughout the nation despite federal law, rulings by the US Supreme Court, and state constitutional amendments to the contrary.

“The Attorney General of the United States should be impeached over his repeated lawlessness in attempting to impose same-sex marriage throughout the nation,” said Reverend Bill Owens, CAAP Founder and President. “It’s one thing to make a political argument that gay marriage should be the law, but it’s quite another to take actions that ignore federal law, Supreme Court rulings, and the constitutions of dozens of states that have specifically rejected the redefinition of marriage which the administration is trying to impose.”

“As much as President Obama and Attorney General Holder would like it to be otherwise, we live in a democracy–with government of, by, and for the people–not a monarchy ruled by a king issuing decrees from on high,” Reverend Owens continued. “The citizens of several states who have voted overwhelmingly to preserve marriage have had their votes voided and thrown out by radical federal judges; and the Obama administration–in particular the Justice Department–has been shamefully complicit in this attack on the rights of those voters.”