I would say this is really messed up[1], but these are people who like Socialists. Well, at least both the Left and the Right are turning on their own. You’ve got the Republicans crucifying Donald Trump over what I feel are appropriate statements about John McCain. Now, you’ve got black Progressives booing Martin O’Malley and Bernie Sanders off the Netroots Nation stage because they had the temerity to say ‘all lives matter’ instead of just ‘black lives matter.’ That’s screwy and just wrong. I hear Hillary was booed off the stage and she didn’t even attend. Heh. This whole race thing, is well, just racist. The #BlackLivesMatter crowd wants someone who panders to blacks and discriminates against everyone else. What ever happened to having a colorblind candidate and justice for all? Bernie is just too white for these fools. He’s too Marxist for me and too much of a nut case, but to the Left, he’s just too white. So is O’Malley and Clinton. The truth of the matter is this crowd wants a black person to continue leading this country regardless of his politics and they want someone who will come down on white America. All lives matter, just not to racists and Marxists. 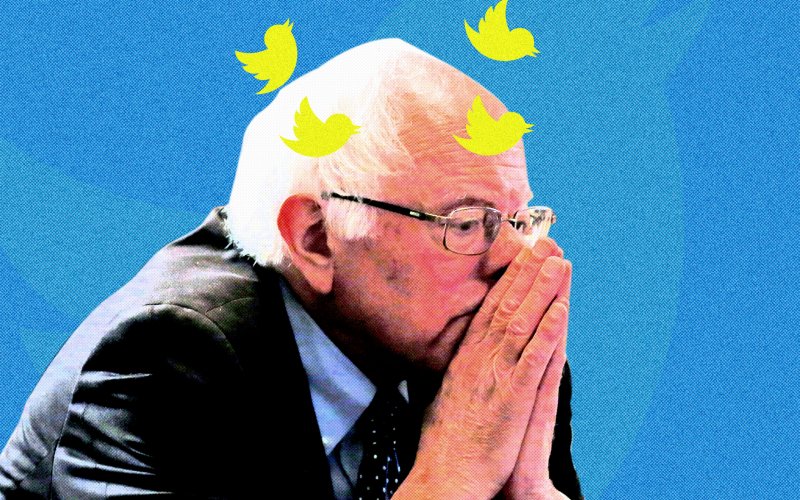 A heated moment with #BlackLivesMatter protesters over the weekend turned the progressive favorite into a mocking hashtag for black activists sick of his seeming inattention to race.

Black Twitter[3] has a bone to pick with Bernie Sanders.

The 2016 lefty darling’s[4] seeming unwillingness to talk about race on the campaign trail is not sitting well with some black activists and observers, and a tense moment turned #BernieSoBlack into a dominant trending topic over the weekend.

Confronted Saturday by protesters at the Netroots Nation conference in Phoenix chanting “Black lives matter!” and “What side are you on?” Sanders was clearly annoyed. “Black lives, of course, matter,” the populist and self-described socialist senator said[5]. “I spent 50 years of my life fighting for civil rights and for dignity…If you don’t want me to be here, that’s OK. I don’t want to outscream people.”

As a senator from Vermont, which is roughly 95 percent white, Sanders has had scant direct experience connecting with black constituents and voters, and he prefers to focus his speeches on income inequality. His campaign events are overwhelmingly white, and his own advisers have conceded—and he himself has acknowledged[6]—that he is still a virtual unknown[7] among African-American voters.

“Basically, the Bernie Sanders campaign has a lot of groundwork to do with regards to building the relationship with black voters,” Terrell Starr[8], a senior editor at Alternet, told The Daily Beast. “There is still privilege with how white progressives view progressive politics with regards to racial discrimination…And what we saw [Saturday] was an example of that disconnect.”

Black Twitter went after the senator after his Netroots appearance: 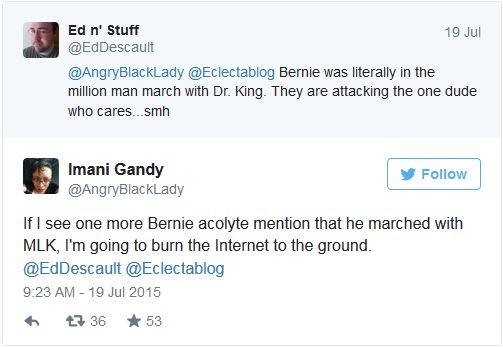 (It’s true: Sanders marched with Martin Luther King Jr. in 1963 and was also arrested[10] for protesting in favor of desegregating public schools in Chicago.)

That @AngryBlackLady tweet, sent out to her 35,000 followers, inspired[11] Roderick Morrow—who runs the “Black Guy Who Tips[12]” comedy podcast with his wife, Karen—to launch the mocking hashtag #BernieSoBlack: 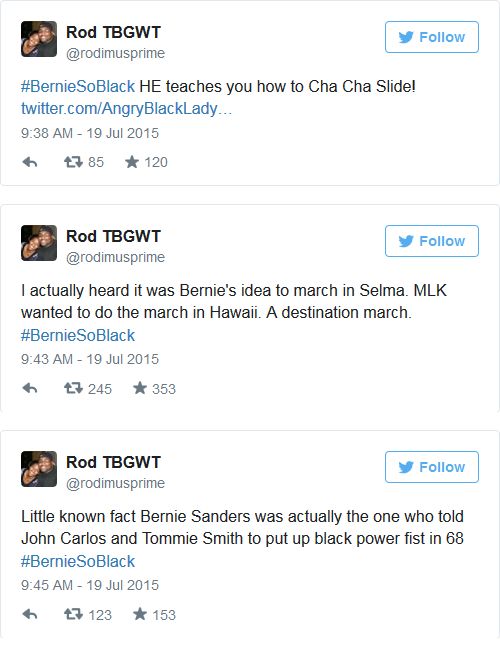 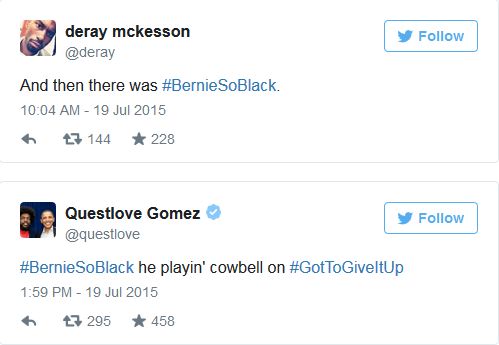 Morrow, who goes by @rodimusprime[16] on Twitter and has more than 11,000 followers, said he was surprised his impromptu hashtag suddenly took off. “I just thought it was a funny joke!” he told The Daily Beast. But he added that his lighthearted jab was rooted in a serious concern about Sanders’s candidacy.

“Every time race is brought up, he pivots to the economy, which obviously a lot of racial disparity comes via economic means, but some of it is just flat out racism and discrimination,” Morrow said. Sanders’s view that “if we had more jobs[17] in Ferguson, this wouldn’t have happened, I’m not sure that is valid. I mean, Mike Brown[18] was on his way to college. It’s not just a jobs thing.”

The Sanders backlash could indicate friction and dissonance between two critical components of the Democratic base: white liberals and African-Americans. Many younger black activists are skeptical not just of Sanders but of the current Democratic field, who they believe have taken the solidly blue African-American vote for granted.

“Not to disrespect what he did with Martin Luther King,” Morrow said. “But if you want to connect with black voters, they need to know what you are going to do now and going forward, not what you’ve done in the past.” 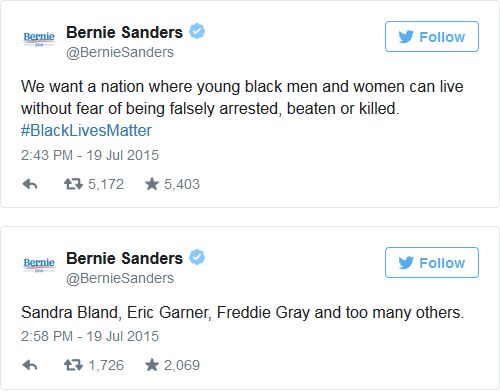 Morrow said he hopes those tweets are a signal the senator will discuss race more frequently during the long campaign. “Well, he’s listening and paying attention,” Morrow said. “The last thing I want for any candidate is for them to give up on the black vote, because that would be the most destructive. Criticism is just part of the job.”

They are right about one thing… it’s not just about jobs. It’s about fueling a race war and police hatred. Sanders may have marched with MLK, but he was tone deaf to his audience at Netroots Nation. Instead of expressing solidarity with the protesters, he talked about economics. “What Sanders should have done, when they said ‘Sandra Bland,’ you say ‘Sandra Bland!’” said political analyst and Blue Nation Review contributor Goldie Taylor, claiming that a simple show of empathy would have disarmed the protest. “He would have shut down the shutdown!” In other words, pander to the masses and do as you are told[20]. The candidates on the Left just aren’t radical enough for these guys or far enough to the Left for their liking. They want a full blown communist or a revolutionary or both.