BOOM: Rev. Franklin Graham Just Told Harry Reid This Is What Will Happen When He Dies

Rev. Franklin Graham is right[1] – one day all those who supported the genocide of the unborn and the monstrous selling of baby body parts for profit, will be called to account in front of the supreme law – God. Those that condone the ripping of babies from limb to limb… sucking their brains out while still alive… or simply snipping their brain and spinal column so they die and are born intact, richly deserve to roast in hell. Harry Reid will be one of those leading the way into the pit, I would wager. Reid tried to do the Progressive two-step claiming Republicans had lost their moral compass by denying healthcare options to women. Reid wouldn’t know… he’s never had a moral compass. He’s a wicked, lying, SOB, who has never given a flip for anyone but himself. His money, his power, his stature… if millions of babies have to die to further his political agenda, those are acceptable costs in the war to enrich himself and control the country. Justice will come one day for Reid and those like him. And it will be thunderous. 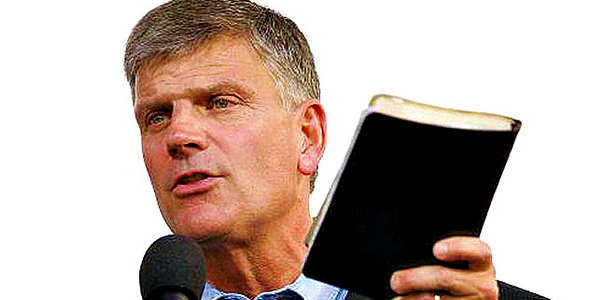 After the Senate tried but failed to pass a GOP bill to defund Planned Parenthood[3] on Monday, Rev. Franklin Graham had a dire warning for the former Senate majority leader and the Democrats who voted with him to kill the bill:

“One day you will stand before God, and the blood of these innocent children will cry out for justice,” Graham wrote.

Minority Leader Harry Reid had accused Republicans of having lost their “moral compass.”

This disingenuous statement from the duplicitous Harry Reid[4] did not [sit] well with Rev. Franklin Graham.

“You’ve got it backwards, Sen. Reid,” Graham wrote on Facebook two days later. “You lost your moral compass years ago!”

Graham added that Reid openly supports “the murder of babies in their mothers’ wombs.”

Even worse, Reid’s support for Planned Parenthood proves that he also supports “the dismemberment and sale of baby body parts.”

Sens. Joni Ernest, James Lankford and Rand Paul had introduced the bill[5] to defund Planned Parenthood after the Center for Medical Progress released several undercover videos showing officials from the organization callously discussing and laughing about the harvesting and sale of fetal body parts.

A fifth video[6] released this week showed a Planned Parenthood executive laughing gleefully while talking about the harvesting of “intact fetal cadavers.”

Only two Democrats, Sens. Joe Donnelly and Joe Manchin — had the “moral compass” to vote for the bill. The rest of them, including Harry Reid, lacked it.

To all of the Democrats who voted against it, Rev. Franklin Graham[7] had this to say: “Shame on you and each one in Congress who did not support defunding Planned Parenthood.”

Those were damning words, but the Democrats who voted against the bill to defund Planned Parenthood deserved them.

It’s very sad that only two Democrats had enough soul left to support the bill. It shows how far the Democrats have fallen. When a people can condone and promote wholesale murder of the innocent and on top of it profit from it and claim it for science, your culture is on the way out and your soul is lost. This is the shadow of Nazism and their medical experiments. Shame on the ones who voted to keep funding the butchers of Planned Parenthood. Their moral compass is broken, that’s for sure. Such arrogant duplicitousness and justification of evil is staggering in the face of what Americans want. They want Planned Parenthood not only defunded, but shut down. Yesterday.