Well well well looky here… President Trump has just met with Saudi Deputy Crown Prince Mohammed Bin Salman in the White House earlier this week, and from that meeting a statement from the Saudi prince’s senior advisor has left liberals triggering OUT OF CONTROL![1] 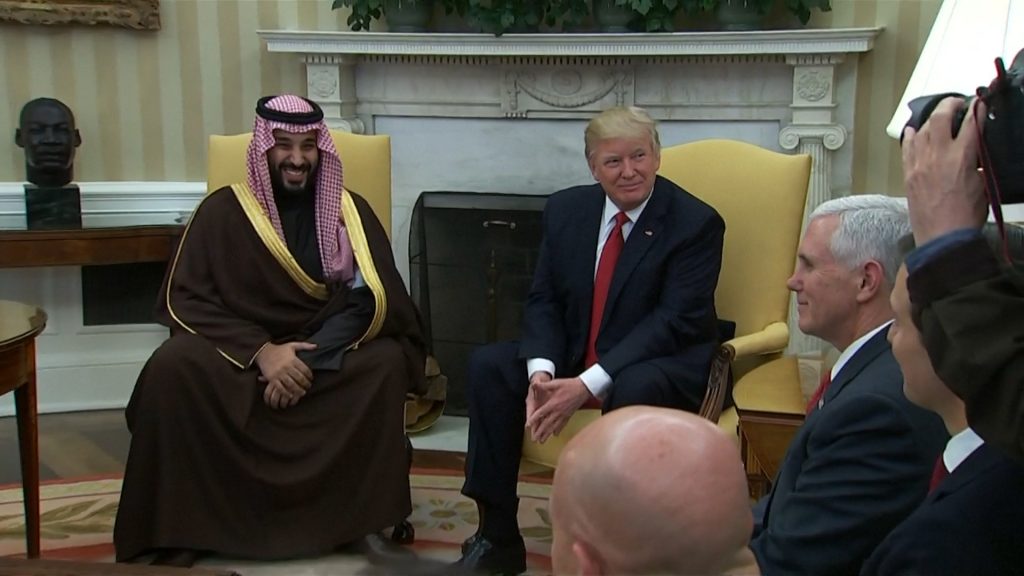 This said statement was that the Saudi prince views Trump as a “true friend of Muslims” and went even further to state that the country does not see Trump’s executive order temporarily restricting entry to the U.S., this list does not include Saudi Arabia, as a ban on Muslims. At…all.

“Saudi Arabia does not believe that this measure is targeting Muslim countries or the religion of Islam. This measure is a sovereign decision aimed at preventing terrorists from entering the United States of America,” the statement read.

Statement described the meeting as a “historic turning point” in U.S.-Saudi relations, claiming that they “had undergone a period of difference of opinion. However, today’s meeting has put things on the right track, and marked a significant shift in relations, across all political, military, security and economic fields.”

“All of this,” it went on, “is due to President Trump’s great understanding of the importance of relations between the two countries and his clear sight of problems in the region.”

There were numerous topics, where they shared their disdain for the Iran nuclear deal.

“Both sides discussed the Saudi successful experience in building a fence on the Saudi-Iraqi border, which led to preventing illegal entrance of individuals, as well as preventing smuggling operations,” the statement noted.

Prince Mohammed Bin Salman expressed, after the meeting, his satisfaction with the positive attitude and clarifications he heard from President Trump about his stance on Islam, which runs against what the media promoted about the President, stressing that his Excellency President Trump has an unprecedented and serious intention to work with the Muslim World and to achieve its interests and that Prince Mohammed considers his Excellency as a true friend of Muslims who will serve the Muslim World in an unimaginable manner, opposite to the negative portrait of his Excellency that some have tried to promote whether through publishing unjust statements that are taken out of their context or by means of unrealistic media commentaries and analyses about his Excellency.

This was a historic meeting that took place, and the timing couldn’t have been any better. The cooperation between the two countries looks like it will be in its utmost level.

We are told that there is still much good news to be released to public in the near future regarding this meeting.

The left? Well they are very confused after this statement was released, and will need to reserve some extended time in their safe spaces in order for them to spend some time discussing with their stuffed animals what their next move will be to sabotage Trump.

The left has claimed, absurdly, that Trump is an Islamaphobe (they love them some “phobe” labels), yet it will be interesting to see how they reconcile that with this statement from Clinton Foundation major donor Saudi Arabia.