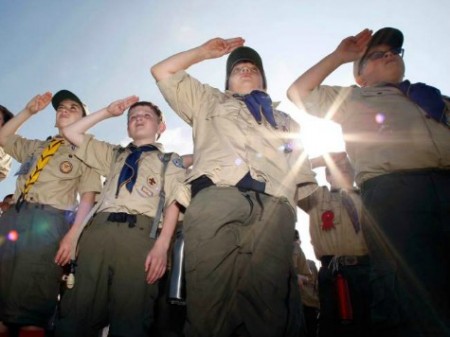 Robert M. Gates, one of Obama’s many past Defense Secretaries, made his comments[2] this week.

The president of the Boy Scouts of America on Thursday called for an end to the group’s blanket ban on gay adult leaders, warning Scout executives that “we must deal with the world as it is, not as we might wish it to be,” and that “any other alternative will be the end of us as a national movement.”

At the same time, religious organizations that sponsor a majority of local Scout troops, including the Mormons and Roman Catholics, should remain free to set their own policies for leaders, said the president, Robert M. Gates, the former director of the C.I.A. and the former secretary of defense.

Mr. Gates called for the changes at an annual national meeting of the group, in Atlanta. He said that he was not yet making a formal proposal but that the Scouts’ governing body should take up the issue formally at a future meeting.

So, what do you think? Time to end the Boy Scouts? Or is it no big deal to allow someone who is sexually aroused by boys to be a leader of little boys?