Even as Democrats have launched into a full frontal assault to engorge the Amtrak budget with more tax dollars to fix the “infrastructure,” we now find out that the train was going 100 miles per hour–double the speed limit–when it derailed. 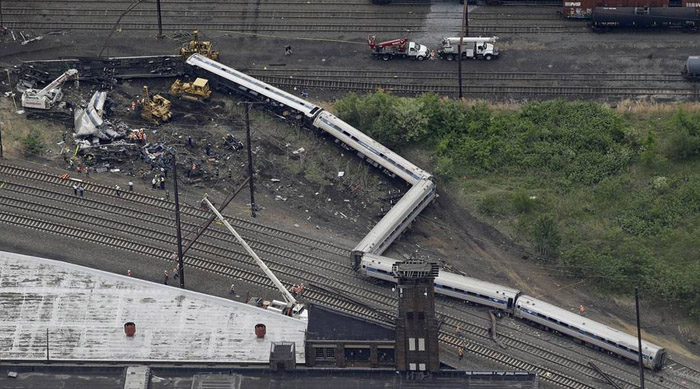 Just like Obama’s one-time Chief of Staff and now Chicago mayor, Democrats are not letting seven dead Amtrak riders get in the way of their demands to spend more tax dollars, certainly.

An Amtrak train involved in a fatal crash here appears to have been traveling at more than 100 miles an hour as it entered a sharp curve where it derailed Tuesday night, killing at least seven people, according to two people with knowledge of the investigation.

The speed limit in that section of track drops to 50 miles an hour, according to the Federal Railroad Administration.

Investigators are focusing on the possibility that excessive speed was a factor in the derailment, one of these people said. The locomotive and all seven passenger cars of the train went off the tracks at a tight curve at Frankford Junction, north of Philadelphia city center. Multiple cars overturned, severely injuring some passengers and pinning others. At least seven people were killed, and more than 200 were injured, including eight who were in critical condition.

This will ruin Obama’s day if he can’t hide behind the death of seven people to justify spending more tax dollars!

In any case, the investigation continues.