Reports are coming out saying that Congressional Democrats have about had it with the President’s massive failures and have given him 72 hours to fix Obamacare… or else.

Democrats are saying that they will join the Republicans in their effort to pass a new “you can keep your insurance” law if Obama doesn’t act quickly.

The metrics are looking horrible for Obama and his destructive Obamacare law, certainly. But there are a few things we need to point out, here.

First of all, Obama really can’t just start changing the law by his mere say so. That would be quite unconstitutional… not that Obama has ever cared much about the Constitution, mind you.

But there is another thing that is really important, here.

Those millions of plans that Obama had cancelled because of his destructive new law are permanently gone. They won’t be coming back no matter how many laws Congress writes at this point… unless Obamacare itself is eliminated.

No tinkering around the edges will fix Obamacare. Only a full repeal will fix it.

The problem is that the Obamacare law (or the Affordable Care Act) has simply outlawed most Americans’ healthcare plans and over the next year or so all those plans will be eliminated–yes, even those who have coverage through their jobs right now and think they are safe.

Unless Obamacare is repealed those new rules for insurance coverage will continue to cancel policies for most Americans and no new laws or tinkering around the edges of Obamacare will stop that. Only the repeal of Obamacare can stop that.

All this comes, of course, after Obama himself spent the lat four years lying to us. No he didn’t just stretch the truth and no it wasn’t just a mere political lie. It was a major, bald faced lie that we could keep our insurance if we liked it. We can’t. His law eliminated that option and he knew it since day one… but lied dozens of times…

It wasn’t just the President’s misspeak, either. Obama also had his administration push that lie[1] for years.

Regardless, all this is a very big black eye for the Obama administration, don’t you think?

But the really, really good news is that Senator John McCain had a GREAT idea today. “Say, why don’t we repeal this Obamacare thingie,” he said today. 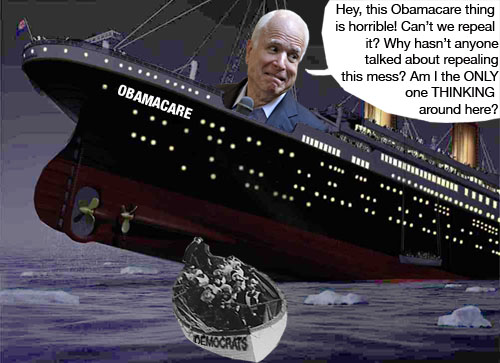 That’s why he’s the smartestest feller in the Senate!