Hmmm… me thinks John Lewis may be getting a bit senile.[1] Either that, or he has told so many lies, he can’t keep them all straight anymore. He claims that he will boycott the Trump Inauguration and it will be “the first time he had missed an inauguration since he had been in Congress.” But that doesn’t seem to be true. When George W. Bush was sworn in, he also boycotted that event and guess why? Because he didn’t think Bush was a legitimate president. I detect a pattern here.

Remember, John Lewis has lived his whole life being a civil rights activist. That turn of events with Martin Luther King Jr. paved the way for a political career for this man. He has spent thirty years heading up a district that is poor and infested with crime (regardless of what he claims) and the only one in all that time who has benefited from his actions, is himself. He got wealth and privilege out of the deal… he got fame and power. I find it highly hypocritical that he now throws false accusations at President-elect Trump when his own glass house lies in ruins around him. 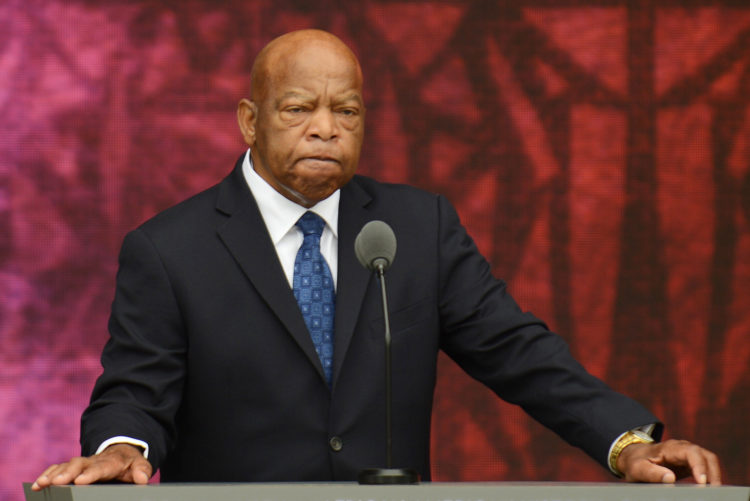 When Rep. John Lewis (D-GA) said he would be boycotting the Trump inauguration, it made a lot of news.

He himself said it will be “the first time he had missed an inauguration since he had been in Congress”.

Yet, that isn’t true.

At least according to the Washington Post’s account of the inauguration of George W. Bush[3].

Some members of the Black Caucus decided to boycott Inauguration Day; John Lewis, for instance, spent the day in his Atlanta district. He thought it would be hypocritical to attend Bush’s swearing-in because he doesn’t believe Bush is the true elected president.

Great question. Was Lewis lying to WaPo, or is he lying now? Probably both. He excels at it. And no, I don’t give a flying crap that he is black or a civil rights icon. I care about his actual actions and deeds. He may not see Trump as a legitimate president, but I don’t view Lewis as a legitimate leader either. Every word that comes from this Marxist is suspect.

Georgia… what is wrong with you? This is a man who is connected to the Democratic Socialists of America and the Communist Party USA. He’s a member of the Congressional Black Congress and the Congressional Progressive Congress. He’s anti-freedom, racist and he’s a communist… we seem to have low standards in Georgia and have had for many years, at least in his district.

I leave you with an epic interview I caught on Tucker Carlson last night – you need to watch every bit of it. Weaver told the absolute truth and it was beyond refreshing. From Fox News Insider:

Mason Weaver, an author and former member of the Black Panther movement, said Rep. John Lewis (D-Ga.) presided over the “destruction of black America” in the years following his march with other Civil Rights leaders across the Edmund Pettus Bridge in 1965.

Responding to Lewis’ contention that President-elect Donald Trump is “not a legitimate president”, Weaver called Lewis an “illegitimate Congressman.”

Weaver called Lewis a “Civil Rights turncoat” who has “collaborated with the Democratic Party to oppress black America.”