BREAKING: Muslim Appointed CHAPLIN Over 14,000 Christian Soldiers, But That’s Not The SCARY Part…

It is a historic appointment the Army just made, appointing a Muslim soldier to chaplain. He’s there to give spiritual guidance to an entire division of soldiers for the first time. 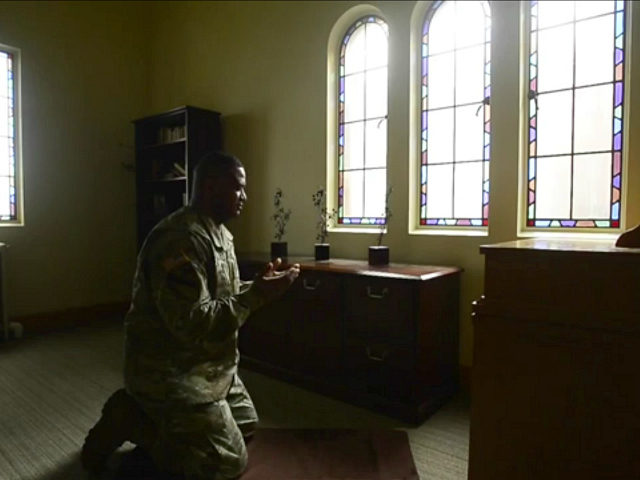 His name is Army Lt. Col. Khallid Shabazz and he has accepted the position of handling the spiritual affairs of 14,000 mostly Christian soldiers…as a Muslim.

In his recount, the offer he received to advise the 7th Infantry Division at Joint Base Lewis-McChord on spiritual matters, went something like this…

“I’m on the phone saying, ‘Thank you, I appreciate it. I’ll serve honorably,’ and then I hang up the phone and I’m jumping all around like a little kid,” Shabazz said. “I was running around the office saying, al hamdulillah, al hamdulillah, praise be to God!”

There are 1400 chaplains, but only ten Muslim chaplains in all military services and only five in the Army. Thus Shabazz’s selection is unusual and historic. There has never been a muslim chaplin in charge of a whole division.

Shabazz has not always been a Muslim though, he used to be a Christian and actually went to a Christian college. He then joined the army at 23 and was assigned to Germany. It was there that he met a Muslim soldier who was always ‘bragging’ about Islam.

He says he quickly grew tired of the Muslim soldier bragging about Islam, so he challenged him to a public debate.[2]

The ensuing debate while on base caused Shabazz to reevaluate his religion. He subsequently converted and changed his name, before encountering struggle after struggle in the Army and later joining on with the Chaplain Corps.

Now Shabazz has admitted although he has converted some soldiers, he states that he is not trying to convert anyone to Islam.

“My job is not to convert anybody to Islam,” Shabazz said. “God guides people. My only goal is to have people leave my office stronger than when they came in.”

He admits that most of his time is spent on advocating for Islam, in efforts to prevent “anti-Muslim” incidents at bases…

When he was asked about being a Muslim and President Donald Trump, he said criticism by soldiers of him is taboo. “Regardless of what they might think, he’s our commander in chief,” Shabazz said.

Here is the question many have for the one who appointed this soldier to be over 14,000 others soldiers…who are Christian.

How is it possible? Islam and Christianity are just not compatible. Period.