Bernie Sanders crushed Hillary Clinton last night[1] in the New Hampshire primary. It wasn’t even remotely close. The final tally was 60% to 38%. Even worse, exit polls on the honesty and trustworthy issue are staggering. Asked whether people think Clinton or Democratic rival Bernie Sanders are more honest and trustworthy, 5% said that Clinton was trustworthy vs. 93% for Sanders. Voters hate and don’t trust Hillary. That’s very, very bad news for her. Clinton’s campaign is imploding and she has now deployed her B team. This is very reminiscent of how she lost to Barack Obama last time around. 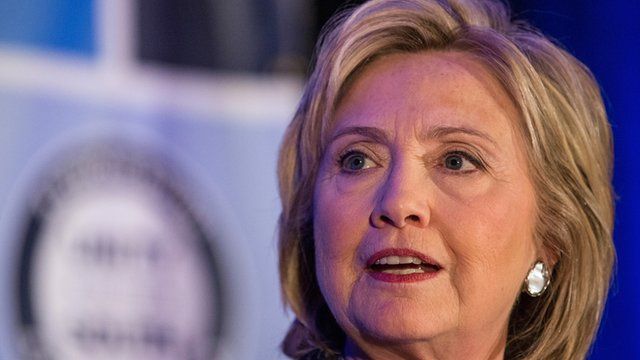 As voting precincts all around New Hampshire close, the final results have not yet been revealed, but new exit polls expose devastating news for Democratic hopeful Hillary Clinton.

According to Fox News exit polling, when voters were asked whether they think Clinton or Democratic rival Bernie Sanders more honest and trustworthy, the Vermont senator won by an astounding margin. 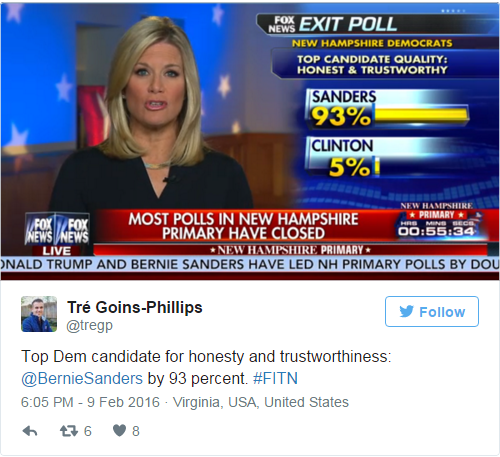 A number of national polls now show Bernie Sanders beating Hillary Clinton. She has got to be in an absolute panic over this. Her campaign is falling apart right before our very eyes. If she wasn’t such a monster, I might almost feel sorry for her. Clinton is not even having TVs at her rallies[4]. She is now calling on Sidney Blumenthal and David Brock to save her[5]. Sanders has a coherent, consistent and concise message: Incomes are stagnant because the economy is rigged by the top one-tenth of 1 percent that controls politics through massive campaign contributions. Clinton has no competing message, just the charge that Sanders’s supporters are “sexist and vulgar.” Brock adds that one of Sanders’s ads was racist because it had too many white people in it. Pathetic. Moving on to South Carolina and Nevada, one has to wonder will an aging Democratic Socialist really be the Democrats’ nominee this time around? Looks like at least in the Dem’s camp the red, white and blue is about to be simply red.