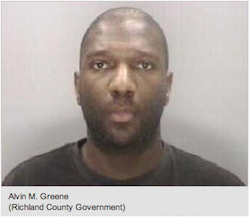 Oh-noes… the Democrats may have thought they had a “quirky” candidate running for Senate in South Carolina in the person of one Alvin Greene. But I doubt they thought they were about to have a candidate indicted on felony obscenity charges. This is, however, what they’ve ended up with regardless

On August 12, a grand jury handed down an indictment of Alvin Greene[1] over a November incident that happened on the campus of the University of South Carolina.

Greene was arrested in November after authorities say he approached a student in a University of South Carolina computer lab, showed her obscene photos online, then talked about going to her dorm room.

I suppose you have to hand it to Greene. He’s a Democrat in a hurry. After all, most Democrats have the good sense to wait until they are elected before getting indicted. THIS guy is ahead of the usual Democrat curve!