This is just incomprehensible.[1] Huma Abedin and Anthony Weiner are reportedly back together and working on their marriage. He burned her at least four times and the last time, he had his baby in bed with him. Sick. And get this… when they disagree, he goes and stays with mommy. Just pathetic. Their breakup was evidently for show because of pressure from Hillary Clinton and company. Why would anyone want to stay married to a perv loser like that? I don’t know who is sicker, him or her.

In 2013, having declared himself a candidate to be mayor of New York, other photos were published of Weiner sexting another woman under the name ‘Carlos Danger.’ Despite the revelation, Weiner did not pull out of the race and eventually finished fifth with just 4.9 percent of the vote. Do you know how humiliating that had to be for Huma? The last one was the worst, he was sending lewd photos to an underage girl. Did you know his parents mortgaged their home to put this dirt bag in rehab after that? What a waste all the way around. 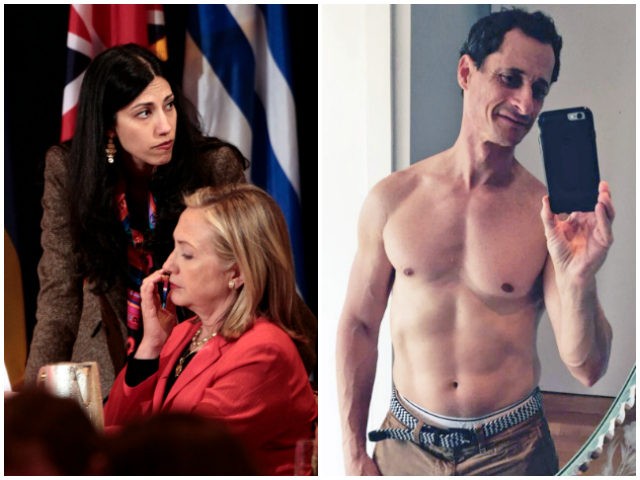 Former Hillary Clinton operative Huma Abedin is reportedly “working hard” to save her marriage with former Democratic congressman Anthony Weiner, just months after the pair separated as a result of his multiple sexting scandals.

Sources close to the Abedin family told the New York Post[3] that “Huma has been working hard on her relationship with Anthony. He has been spending 80 to 90 percent of his time at the [Irving Place apartment] they share. If there is a disagreement, he goes to his mother’s apartment in Brooklyn.”

“Both [his and her] families are hoping they will reconcile,” the source continued.

Another source supported this story, saying that the couple’s separation was “more for optics for the campaign and pressure from Hillary’s camp.”

The potential reconciliation is perhaps surprising given Weiner’s multiple sexting scandals. The first, exposed in 2011 by the late Andrew Breitbart and dubbed ‘Weinergate,’ led to Weiner’s resignation from Congress and the issuing of a public apology.

And as far as Hillary’s email scandal, Weiner was caught up in that too. A laptop examined in that investigation reportedly contained emails from Hillary Clinton’s private email server, as both Weiner and Abedin used the device. This development led FBI Director James Comey to announce that the bureau had re-opened its investigation of Clinton’s handling of classified information. The Clinton campaign to this day claims the Comey announcement caused significant damage to her candidacy. So, both Weiner and Huma are pretty much persona non grata in the Democratic Party these days.

Federal prosecutors have been weighing going after Anthony Weiner on child pornography charges. But even with that, Huma claims to love this jerk. That says an awful lot about her, doesn’t it? She blames the “pressures of the campaign and presidential race and him drifting off into obscurity” for his latest relapse. Uh no… he’s been a twisted freak since long before that and she knows it.

“A lot of [their] friends believe this is an illness, that he is sick. [But] Huma takes it into consideration that there’s been no affair, or physical contact that anybody is aware of. He never met [the women],” the family friend added. Seriously? He showed up at that underage girl’s home. One of the women he was involved with claims to have met him numerous times. That is just plain delusional. Just like their marriage is.

EXCLUSIVE: Anthony Weiner sexted a busty brunette while his son was in bed with him https://t.co/f2C7tn1yoy[4] pic.twitter.com/JNmerTREKD[5]