A US warship has been despatched to the waters off the Yemeni coast just as a flotilla of Iranian ships are headed there likely to deliver weapons to Islamofascist terrorists there. 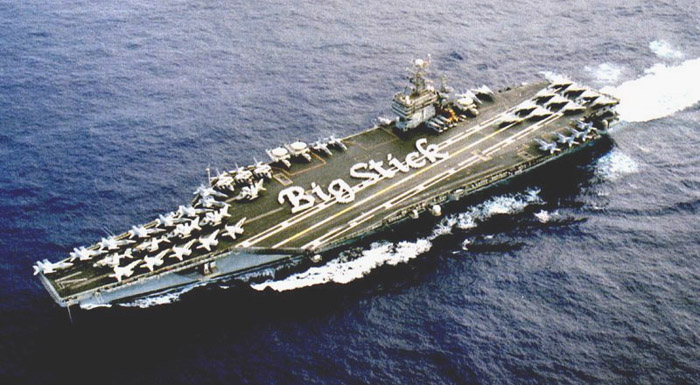 The Aircraft Carrier USS Theodore Roosevelt[1] is carrying its “big stick” to Yemen to intercept Iranian support for terror.

Navy officials said Monday that the Roosevelt was moving through the Arabian Sea. The U.S. Navy has been beefing up its presence in the Gulf of Aden and the southern Arabian Sea amid reports that a convoy of about eight Iranian ships is heading toward Yemen and possibly carrying arms for the Houthis. Navy officials said there are about nine U.S. warships in the region, including cruisers and destroyers carrying teams that can board and search other vessels.

The officials spoke on condition of anonymity because they were not authorized to discuss the ship movement on the record.

The Houthis are battling government-backed fighters in an effort to take control of the country. The U.S. has been providing logistical and intelligence support to Saudi Arabia-led coalition launching airstrikes against the Houthis. That air campaign is now in its fourth week.

Is Obama strong enough to force a show down with his friends in Iran? We’ll see.