Brent Bozell: If a Story Doesn’t Help Obama, The Media Won’t Cover It 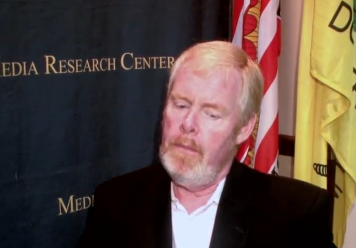 Ginni Thomas of The Daily Caller sat down last week with L. Brent Bozell,[2] Founder and President of the Media Research Center, to discuss a wide variety of issues ranging from media bias to the future of the conservative movement. Bozell asserted that the most under-reported story this year will be the degree in which the media will not report news.

He explained, “There is a narrative that is evolving out there which is if the story helps Barack Obama re-election, it’s news. If it doesn’t, it’s not news, you’ve seen story after story after story that has been completely spiked, on purpose, by the media.

I’ll give you a couple of examples. When the Catholic Bishops launched a- announced a lawsuit against the president on the health care mandate that happened to be the single largest lawsuit in the history of the republic against a standing United States President on the number one issue of concern to the media.:  how much coverage did it get on ABC? Nothing. CBS? Nothing. NBC? Nothing.

Then you had a demonstration where in 163 cities, simultaneously, there were these religious freedom demonstrations on a Sunday. 163 cities- How much coverage on ABC? Nothing. CBS? Nothing. NBC? Nothing. That’s-that’s willful, deliberate- politically motivated news censorship. So you asked me what’s the number one story not being reported-it’s the fact that they’re not reporting news if it hurts.

Concerning the conservative movement, Bozell feels that there is a certain set of Republicans who aren’t philosophically sound and timid to tackle the issues that seriously effect the socio-economic fabric of the country.:  One thing Ronald Reagan said about coming to Washington is that you need to be unafraid and philosophically sound.:  During his interview on August 5th, Bozell said:

The reality is where the Republican Party is concerned it has lost its way dramatically- the Democrats haven’t, they know what they want to do. They will obfuscate until the end of time, but the Republicans got the tall order to head for the tall grass and they’ve never come out of it- it takes leadership and it takes guts and by God if you don’t have either why did you come to Washington?
Who out there is talking about not stopping the deficit but doing something about the debt?

Who’s talking about not just controlling costs, but reducing the size of government? My goodness what ever happened to the conversations we use to have about Department of Education and the Department of Energy-when was the last time we tested- means tested this federal government to see what an incredible waste of money it is and what do you do when you find that waste-you get rid of it?