California schools really do hate America. In California apparently you are a bad little boy if you wear to school clothing adorned with the good ol’ Red, White and Blue. You get thrown out, in fact. At least that is what happened to several patriotic American boys that attend Comunidad Educativa Vivo Roble in California… oh, wait, that is the Live Oak High School in California. With all the dissing of America going on in California I thought the school had changed its name. Sorry.

For the Gilroy Dispatch Lindsay Bryant reports[1] that five young students of Live Oak High School in Gillroy, California were kicked out of school on Cinco de Mayo because they dared to wear the venerable American colors while all the Mexican students were wearing the Green, White and Red colors of the Mexican flag. According to Assistant Principal Miguel Rodriguez these evil American children were “starting a fight.” 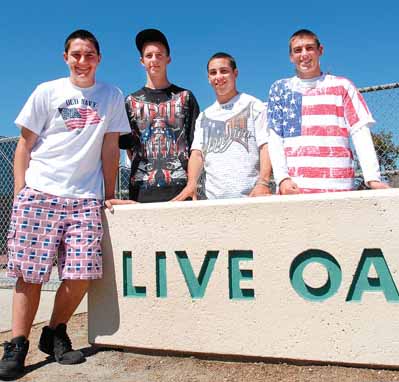 Yeah, in American schools you are “starting a fight” when you wear America themed clothing but innocent as the driven snow when you are sporting the colors of foreign nations. Braynt reports that over 100 students were seen in the Mexican colors. One rather corpulent girl-child even pained her face and various overly exposed body part with the celebratory colors.

One Mexican-American student, freshman Laura Ponce, had a Mexican flag painted on her face and chest, peaking out of her low-cut shirt. She did it because, “it’s our day, the only day we can show our spirit.” A school administrator took away the Mexican flag she was carrying as she was waiting to go home. Ponce said: “not cool.”

Even the morbidly obese can celebrate Cinco de Mayo, hold the lettuce. But don’t go wearing any of those evil, evil Red, White and Blue clothes! 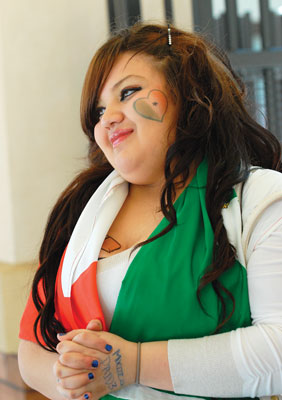 I am sure that Assistant Principal Miguel Rodriguez only speaks Spanish, I mean I can’t imagine him sullying his delicate mouth with the guttural sound of English, so let me help him out with what these fine young boys were exhibiting. It’s called patriotism, Mr. Rodriguez…. oh, yeah, sorry… I mean patriotismo Estados Unidos de América. Forgot your hatred of things American/English there for a second, Mr. Rodriguez. My most fulsome apologies.

But it is amazing that this whole Cinco de Mayo thing is such a contentious event, anyway. First of all every American should understand that Cinco de Mayo is not an official holiday in Mexico. Not only that but here in the U.S. people claim it is “Mexican Independence Day,” which is also not true — that would be Sept. 16. On top of all that, Cinco de Mayo is only celebrated in the U.S. because beer companies and other capitalist businesses pushed it in order to sell more stuff to Mexican-minded residents. So, I am torn. I want to celebrate a good American capitalist venture, yet am conflicted because the faux celebration has been used by America’s enemies — like the aforementioned Mr. Rodriguez — to tear her down.

But, that last thing really is funny to me. Most Mexican activists are commies yet they are persisting in pushing a faux holiday created by beer companies in order to destroy their host country! Isn’t that a bit ironic?

So, what the heck. Viva la Cinco de Mayo, that’s what I say! Who needs America the light of freedom and liberty to the world, eh Mr. Rodriguez? After all in what nation can you make more money than anyone you know, retire at 50, and then make dozens of times more money in pension payments? In what country can you get handed power over your fellows despite your hatred for that country? And in what country can you stand proud to subvert your host nation in order to advocate foreign ideals? Certainly not in that evil U.S.A..!

Yeah. Mexico is so much better, right Mr. Rodriguez?

You simpering, ungrateful, worm of an un-American cretin, you. How do you say THAT in Spanish?