Can Muslims Be American? 58% of US Muslims Say Free Speech Should Be Illegal

A recent poll seems to suggest that Muslims living in the USA want to outlaw free speech and a large number even agree that blasphemers of the Muslim god should be executed… HERE in the USA! It all makes one wonder if it is possible to be both a Muslim and a true American? 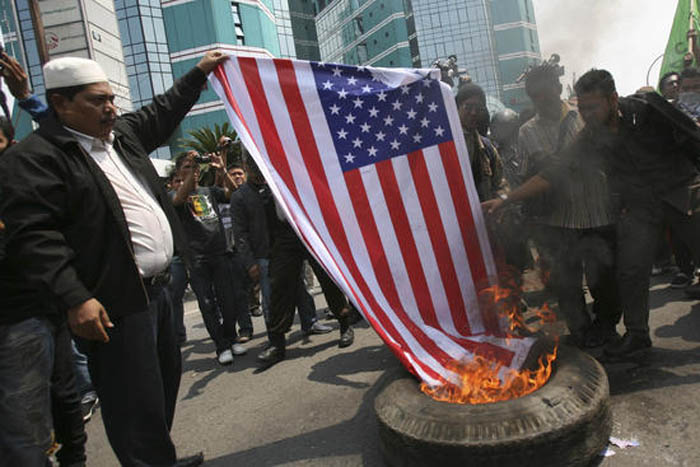 For years during the invasion of Iraq under George W. Bush some doubters of Bush’s tactics said that Muslims cannot be made to understand western freedoms and constitutional government. Many said Islam is incompatible with freedom and modernity. Bush insisted that Iraqis and other Muslims were “just like everyone else” and yearned to be free. This normal human yearning would make them understand and welcome our efforts there, Bush felt.

While we’ve certainly had mixed and usually disappointing results from our efforts in Iraq and Afghanistan, we have certainly seen that Islam is often a stumbling block to freedom.

And now we get this poll showing that even Muslims who live in America hate America’s most important principles.

…the results of polling data collected by Wenzel Strategies during October 22 to 26, 2012, from 600 U.S. Muslims, indicate widespread support among American votaries of Islam for this fundamental rejection of the basic freedoms of expression and conscience, as guaranteed under the First Amendment to the U.S. Constitution. When asked, “Do you believe that criticism of Islam or Muhammad should be permitted under the Constitution’s First Amendment?, 58% replied “no,” 45% of respondents agreed “…that those who criticize or parody Islam in the U.S. should face criminal charges,” and fully 12% of this Muslim sample even admitted they believed in application of the draconian, Sharia-based punishment for the non-existent crime of “blasphemy” in the U.S. code, answering affirmatively, “…that Americans who criticize or parody Islam should be put to death.”

Is it possible to be an adherent of the most restrictive, oppressive religion in human history and also be a true American who values freedom and religious liberty? This poll suggests that it is difficult to be both an American and a Muslim.

The above except came from Andrew G. Bostom’s interesting piece entitled, “Ten Key Points on Islamic Blasphemy Law[1].” If you want to know the roots of sharia, read this detailed piece.