We all knew the Clintons were self-serving monsters[1], now the details are finally coming to light – from the New York Times no less. There is literally nothing they would not do for money and power… including facilitating the sale of uranium holdings to our enemies, the Russians, which could be used to strangle us in a conflict or in nuclear weapons against us. Bill Clinton was right in the middle of those treasonous negotiations, while the Hildebeast kept her distance for plausible deniability. But the governmental committees, agencies and departments that signed off answered to her. This is greed and corruption of epic proportions that has made the Clinton dynasty the most wealthy ex-presidency in history. 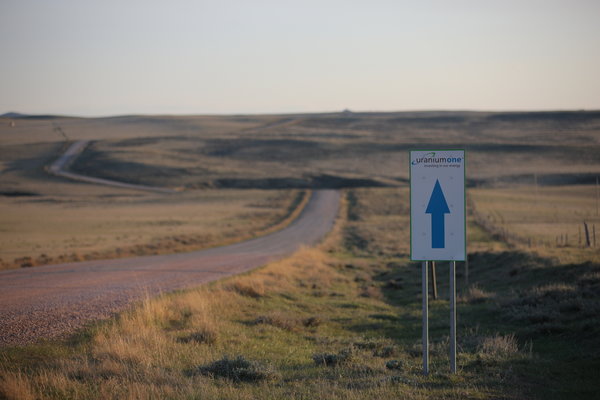 A Uranium One sign that points to a 35,000-acre ranch owned by John Christensen,
near the town of Gillette, Wyo. Uranium One has the mining rights to Mr. Christensen’s property.
Matthew Staver for The New York Times

The headline in Pravda trumpeted President Vladimir V. Putin’s latest coup, its nationalistic fervor recalling an era when the newspaper served as the official mouthpiece of the Kremlin: “Russian Nuclear Energy Conquers the World.”

The article, in January 2013, detailed how the Russian atomic energy agency, Rosatom, had taken over a Canadian company with uranium-mining stakes stretching from Central Asia to the American West. The deal made Rosatom one of the world’s largest uranium producers and brought Mr. Putin closer to his goal of controlling much of the global uranium supply chain.

But the untold story behind that story is one that involves not just the Russian president, but also a former American president and a woman who would like to be the next one.

At the heart of the tale are several men, leaders of the Canadian mining industry, who have been major donors to the charitable endeavors of former President Bill Clinton and his family. Members of that group built, financed and eventually sold off to the Russians a company that would become known as Uranium One.

Beyond mines in Kazakhstan that are among the most lucrative in the world, the sale gave the Russians control of one-fifth of all uranium production capacity in the United States. Since uranium is considered a strategic asset, with implications for national security, the deal had to be approved by a committee composed of representatives from a number of United States government agencies. Among the agencies that eventually signed off was the State Department, then headed by Mr. Clinton’s wife, Hillary Rodham Clinton.

As the Russians gradually assumed control of Uranium One in three separate transactions from 2009 to 2013, Canadian records show, a flow of cash made its way to the Clinton Foundation. Uranium One’s chairman used his family foundation to make four donations totaling $2.35 million. Those contributions were not publicly disclosed by the Clintons, despite an agreement Mrs. Clinton had struck with the Obama White House to publicly identify all donors. Other people with ties to the company made donations as well.

And shortly after the Russians announced their intention to acquire a majority stake in Uranium One, Mr. Clinton received $500,000 for a Moscow speech from a Russian investment bank with links to the Kremlin that was promoting Uranium One stock.

At the time, both Rosatom and the United States government made promises intended to ease concerns about ceding control of the company’s assets to the Russians. Those promises have been repeatedly broken, records show.

These uranium company holdings of Uranium One are in Wyoming, Utah and Texas. The control of this uranium also affects our utilities as a nation. Russia now controls 51% of Uranium One and 20% of all uranium reserves. We would not let China buy a controlling interest in gold mines in Nevada because of military concerns, but we’ll let the Russians control uranium which has nuclear implications?

• Canadian company Uranium One owned uranium mines in the US and Kazakhstan.

• Uranium One’s mines account for 20% of the uranium mined in the US. Uranium is used for nuclear weapons, so it is considered a strategic asset to the US.

• Russia’s state-owned atomic agency, Rosatom, bought a 17% stake in Uranium One in June 2009.

• Investors in Uranium One gave money to the Clinton Foundation starting in 2005 and through 2011. On June 29, 2010, Bill Clinton was paid $500,000 to speak in Russia by an investment bank with ties to Russia’s government that had a buy rating on Uranium One’s stock.

• In January 2013, despite assurances to the contrary, a subsidiary of Rosatom took over 100% of the company and delisted it from the Toronto Stock Exchange.

• Clinton was supposed to disclose anytime there was a conflict of interest between foreign donations and State affairs. The Clintons disclosed only about $250,000 of the millions that the foundation received over the course of the deals.

Hillary Clinton has not disclosed these donations and is in the process of cutting ties with the donors on the surface at least. She is refiling tax returns and doing everything she can to cover this up, while hotly denying any wrong doing. She is knee-deep in corruption and scandal on this, just as she is in Benghazi and the email deletions. America cannot afford to have another lying, corrupt oligarch lead her as a nation – unless of course we like being led off a cliff to the rocks below.