A foodservice worker at Chicago’s Brookfield Zoo was fired this week after she posted an Instagram photo with a caption containing a racist slam against white patrons. 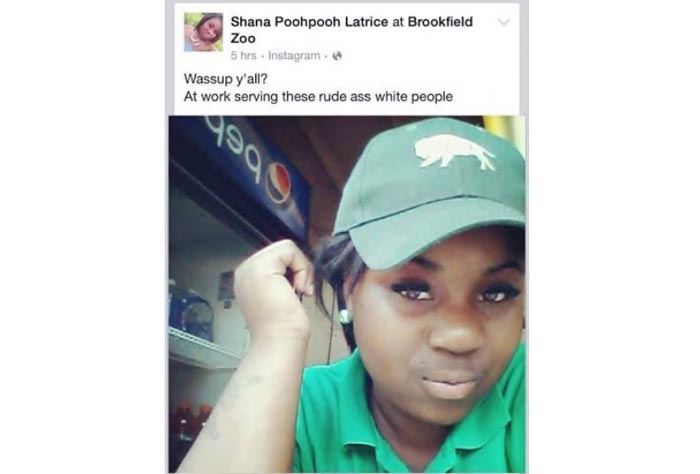 Authorities at the Brookfield Zoo took “prompt action” when the employee’s post[1] hit the local news and then went national.

The caption on the young woman’s photo of herself in a Brookfield Zoo uniform read, “Wassup y’all? At work serving these rude ass white people.” She also noted her location as “Brookfield Zoo.”

Brookfield Zoo’s Facebook page has been flooded with comments from people calling the woman racist and threatening to boycott the zoo if the employee isn’t fired. Others defend the woman and plead with the zoo not to fire her.

The woman has removed her Facebook page, but NBC Chicago reported that she responded to the uproar with a post that said, “I know what I am & racist is not one of em.”

Yesterday, we became aware of the actions of a single employee which we agree are unacceptable. This employee’s statements in social media are in violation of our policies and do not reflect our institution’s values. We have zero tolerance for these kinds of divisive behaviors. We treat all employment matters confidentially but please know that we took prompt action to remedy the situation this morning.

We hope you continue to hold Brookfield Zoo in high regard and not let the actions of one individual overshadow the longstanding good work of the Chicago Zoological Society.

So, what do you think? Did she deserve to be fired?